The Vast of Night (2019) — Confessions of the extraterrestrial kind 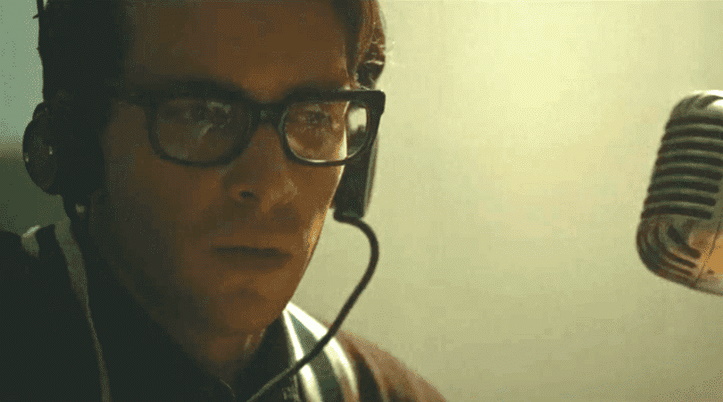 “When I can’t see a face my perception gets pickled.”

ZombieDog’s review: The Vast of Night creates a hypnotic slow burn. It’s the 1950s, but it’s not exploiting this for setting the scene to previous sci-fi films from that era; it’s using it as a background for low-tech. The town is a character, but a very simple character. Mostly a bystander. Watching what’s happening the same as us.

Setting the stage for a Friday night basketball game — a nod to the monster movies from the era — we get to know all the characters and see normal activities before the strange things start to happen.

[Spoilers ahead!] First-time director Andrew Patterson shows off his cinematography skills by giving us a single long shot that takes us through the town at about hip level and gives us a sense of scope of not only the area but the tone of the space also. One of the really cool behind the scenes about this shot is that it was done with a go-kart. When you know that, you kind of enjoy the zig-zag of the camera movement just a little bit more.

This is where we are introduced to the two primary characters: Fay, a switchboard operator, and Everett, a local DJ. From the moment we meet them, there is a heavy dialogue exchange. This works for the movie because we get a sense of character development and understanding of the growing situation. There’s a halfhearted attempt to make them love interests, but it doesn’t pay off, and to be honest, it doesn’t really need to. This is about the greater mystery that is happening and starting to unfurl around them.

We get our first indication that something isn’t right when Fay starts to hear unusual sounds from a garbled phone call saying that there’s something hovering over the farm. The call abruptly stops and is followed by weird sounds coming over the wire.

Out of actual curiosity or her infatuation with Everett, she shares the phone call with him while he is broadcasting. Everett is instantly on board, so much so that he stops the current record playing to play the audio.

After playing the mysterious sound on the air a phone call comes in. The caller, Billy, tells Elliot a story about something similar that happened to him in the military. He says that the signals were coming from the sky communicating with something else which was answering back. It’s unclear and we don’t even know if he’s telling the truth but, we get a sense of deeper mystery building.

If there is one thing that truly defines this film, it is the uncertainty that we get with each revelation. We never know if it’s imaginary or real and that’s what keeps us moving forward. That’s what makes The Vast of Night worth our time.

The film takes its time to build suspense. The camera holds on people for long shots. There are extended dialogue scenes where characters are talking about what happened, what do they think is happening, and what do they think will happen. It really gives us a sense of knowing these people and what their lives are like. This is something I consider modern movies lacking altogether. A five-minute dialogue scene has the potential to do more for a movie than a half-hour CGI sequence.

Shortly after, another call comes in. Mable, the caller, doesn’t want to tell her story on the radio — she wants Elliot to come there so she can tell him face-to-face what she thinks is happening. Elliot is keen to interview this woman, but he also has a feeling that something is truly happening, Fay who has expressed interest from the beginning in becoming part of radio is more than eager to follow him.

Mable tells a story about a woman who came into town who was dehydrated and spoke a strange language. Further into the story, and seemingly unrelated, she reveals that she had a son. She starts to talk about how the baby behaved weirdly and made strange noises. At first she was scared, but then she started writing down the words he spoke. The words her child spoke were exactly the words the woman from the desert had spoken. Her child did this the entire time he was growing up.

It’s here she tells us that she knows who these people are, and she deliberately states that they are not from Earth, calling them the “people in the sky.” She believes that they’ve been coming here for a long time, waiting for people to get together (like at the basketball game that started at the beginning of the movie).

Taken separately, each of these individuals who comment would sound crazy, but in the context of what’s going on, you feel as though we’re hearing the absolute truth. It all seems fantastical, yet the likelihood that it could be a prank or just crazies never really go away.

More reports keep coming in about seeing something in the sky or something’s hiding in the clouds. When the reveal finally comes it is simple, subtle, and powerful all in one moment. We realize what everybody was saying was true. There is no dialogue spoken but the impact of the moment is clearly felt. Additionally, no questions are answered, leaving it to the viewer to decide. Are the aliens evil or are they benevolent — there are no answers. That’s why this movie works.