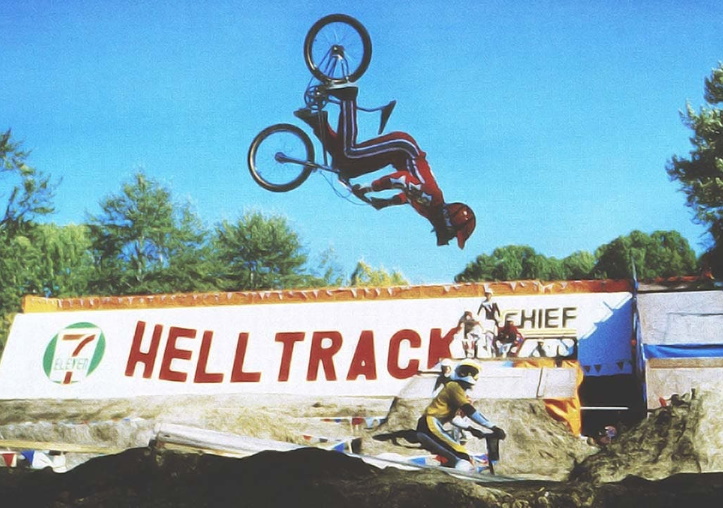 “It’s going to take a radical miracle to beat this guy.”

Justin’s review: For a good while now, Rad has been terribly absent from my ’80s movie bingo sheet — to my great shame. It’s high time I enter the cult of Rad and drink deep of the cup of BMX, so that my education may be complete. There are like three metaphors in this paragraph so far, and I’m not going back to fix any of them. Let’s ride on!

BMX is certainly still around today, but it seemed to really peak in the 1980s. So many kid-centric movies from the time, including E.T., Karate Kid, and Goonies, featured several scenes of our heroes bikin’ it around town and across accommodating wilderness. Bikes weren’t just a way to get around before driver’s licenses; they were statements of rebellion and awesomeness, even if they kind of look like something little kids would ride today instead of teenagers. And Rad sat on top of the pile of Huffy bikes in a category all its own.

The first thing we must discuss about Rad — other than the spot-on title — is the amazing soundtrack. If you had to own only five movie soundtracks from this era, Rad would be an incredibly solid choice. There’s just nine tracks on it, and not a loser in the bunch. “Break the Ice,” “Riverside,” “Thunder in Your Heart,” and “Send Me an Angel” are just the tip of the iceberg, under which is a layer of synth and sax like you wouldn’t believe.

But there’s a movie here, and we must revel in it. Bill Allen is Cru Jones, a teenage boy who’s being pushed by his mother to take the SATs but really wants to follow his heart to perform in BMX races — one race in particular, the “Hell Track,” which is coming to his very town. Yes, this is one of those sports movies where an entire town is absolutely enraptured by a single random athletic enterprise.

Cru’s got some obstacles to overcome before he can even race, including his cranky mom (looking out for his college future, how dare she!), the devilish president of the racing association, a group of arrogant BMX professionals, and a lack of necessary funds. But don’t lose heart, gentle reader, for there is nothing that a well-scored montage, the love of Lori Loughlin (who plays Cru’s love interest Christian), believing in oneself, and the undying adoration of an entire village can’t overcome.

There’s so little in Rad that doesn’t aim to entertain you. It’s got an upbeat attitude that vibes from start to finish. It features kids playing hide-and-seek with motorcycle cops. It has something called “ass-sliding” that’s just as weird as it sounds. It’s sincere without a trace of irony or meanness. It gets teens to fall in love with each other by performing a blend of bike tricks and dancing. It makes us fall in love with BMX from all of the races and stunts that are pulled off here (done by 25 or so actual BMX pros). There’s a rousing final race to cheer. And Cru and his buds are a hoot to hang out with.

Even though Rad bombed in theaters back in ’86, it’s become the very definition of a cult classic in the years since. It’s grown a huge following for its fun-loving attitude, terrific score, and memorable bike tricks — and crowds of people came out to celebrate its 35th anniversary re-release at Fantastic Fest 2021 with the cast and crew. I’ve seen it held up as the epitome of ’80s movies, and after having seen it, I agree with that assessment. Allen lovingly called this movie “deep-fried in ’80s cheese” — but let’s not forget that cheese is dang tasty and never turned down at a party or gathering.