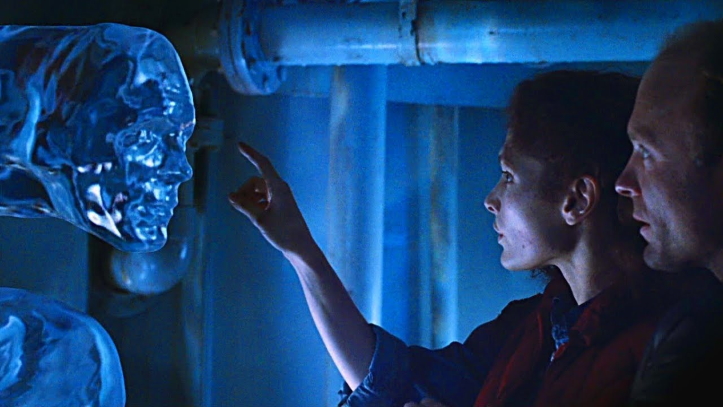 “You never backed away from anything in your life! Now fight!”

Justin’s review: It’s hard to deny that The Abyss is a mess of a movie. A beautiful, occasionally wonderful mess, but a mess even so. This project had a notoriously difficult production and suffers from a narrative that leaps all over the place and ultimately couldn’t nail the third act. But dang it if I don’t enjoy seeing James Cameron back when he was actually trying to make ambitious movies instead of weird vanity projects.

When a U.S. submarine has some sort of accident, the government enlists the help of nearby drillers to aid a SEAL team in the recovery. The rig is led by Bud (Ed Helms), an affably cranky coot who gets along with everyone — all save for his estranged wife Lindsey (Mary Elizabeth Mastrantonio), who pops down with the SEAL team because she designed the platform.

Unfortunately, recovery of the sub goes from “difficult” to “catastrophic” when the SEAL team leader (Michael Beihn) goes bonkers due to the underwater pressure, the drilling rig suffers a string of disasters, the Soviets get nearer and nearer, and aliens start investigating. Yup, apparently the submarine crashed into an alien ship, and now it’s anyone’s guess what their intentions are and what will happen if the U.S. and U.S.S.R. decide to escalate things.

The Abyss is perhaps the least focused of all of Cameron’s blockbusters, and you can feel parts not exactly clicking together the way that they did in his other films. It all feels weird and cramped and discombobulated, teetering between a scifi flick and a disaster pic. But there are gems to be extracted here, such as the breathing fluid (and the poor rat!), the tense underwater traversing scene, the nasty effects of high pressure at low depths, and even the very early CGI water alien that elected to go with beautiful over believable.

I just wish The Abyss was more fun. It’s often a little too serious and tense, leaving the audience viewer hunched over after two hours of few smiles and fewer things to cheer. I’ve probably watched this seven or eight times, mostly in my youth, and I could never get myself to have any feelings stronger than “like” for it. 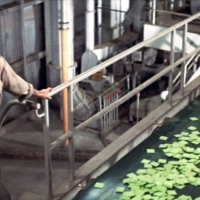 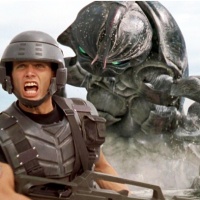