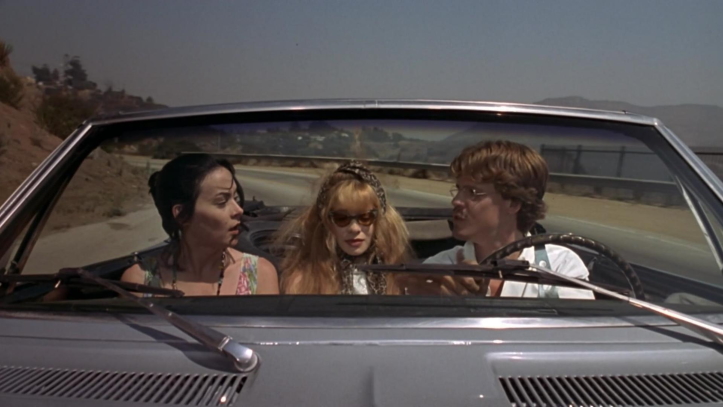 “I’m trying to tell your wife that I’m in love with her.“

Kym’s rating: Three and a half broken hearts out of four

Kym’s review: This is a movie about love and the disrupting effects that it can have on people’s lives. Joseph and Sarah are a couple who happen to be best friends with Frank, who just happens to fall in love with Sarah the day before her wedding. Mayhem ensues from Frank’s declaration of love and the fact that Frank and Sarah eventually sleep together.

The main reason that I enjoy this movie (and I like it more with every viewing) is the great dialogue. The characters are extremely true-to-life and can be very witty at times. While the story in itself of the love triangle is interesting, it’s truly the rest of the movie that makes me enjoy it so much. The poker night scenes (I love to play) are terrific and when the mother-in-law of one of the poker players shows up, the insanity that runs amuck is hysterical to watch.

The most interesting part of the film is when Quentin Tarantino shows up and proceeds to tell one of the characters why Top Gun is one of the best scripts to ever come out of Hollywood (subversion is the reason. Specifically, the movie is about a man’s struggle with his own homosexuality. Watch it for this part alone if no other reason). I found the movie extremely funny, but also kind of sad since love can be so painful at times. Give it a try. You may be surprised.

Justin’s rating: I would rather repeat having all of my previous girlfriends break up with me than watch this again

Justin’s review: As I’ve previously said, I just don’t go for romance movies nowadays. Good thing this isn’t one. Nope, this is an attempt at one between three people — a guy who loves a girl who marries him but flirts with this other guy who’s the first guy’s best friend and who eventually (TITLE!) sleeps with her.

I confess, I really didn’t like or care for any of the characters in this movie. Whiney. Pushy. Moody. Manic-Depressive. It was as if realistic emotions were on haitus during the making of this film, and the characters instead had to go around with sour looks on their faces and cheesy beards trying to look and sound “deep” to the Gen X crowd. I don’t buy it. Everyone is dysfunctional in this movie.

It’s a little fun when the movie lets loose with its characters and situations instead of trying to make this into some twisted romance. Six social situations are presented, the best being when a boring drone of an aunt comes to visit and is tormented by Nigel and his bizarre friends. Meg Tilly is the center of attention for these two sour men, and I freely admit, they can have her. She doesn’t have the looks, the charm, or the personality to attract. She, in fact, looks doped up most of the film. My good friend Q.T. (quentin tarantino) directs and stars in the last social gathering, doing what he does best: talking in choppy sentences about really bizarre subjects.

I suppose I should be fair and admit that I wasn’t bored watching this movie nor really emotionally upset (as I tend to be with romantic films). The ending, which I won’t spoil for you, leaves you once again with the sense of “What just happened?” So, hey, give it a chance. Or don’t.

Mark’s review: I’d have to go somewhere in-between Justin and Kym’s reviews of this film. Its got some great moments, and the ability to make me laugh out loud, but you just get too… annoyed by the characters, especially Craig Sheffer and Meg Tilly. Could you fall in love with anyone as self-obsessed and downright boring as either of these two? Meg Tilly is supposed to make us believe that she has the charms to devote two men to her, but I’m sorry, it just doesn’t come off.

This is the main problem the film has, as the rest of it is pretty brilliant. The poker table scenes are hilarious, especially when Parker Posey and Joey Lauren Adams start coming along (why is never really explained, but I like it better that way), and Ms. Adams lays a few songs on us too (wonder if they’re on the soundtrack CD), top stuff. There are a few other great scenes too, especially at the party given for one of the poker buddies, whih involves the mother-in-law from hell and some pot in a cramped bathroom, which all degenerates brilliantly. The Quentin Tarantino scene is justly famous too.

I really want to like this film. Eric Stoltz is excellent, as usual, in fact he’s the only sympathetic “star” in the film, and the supporting characters do good work too. There are also some nice touches, like the whole umbrella thing, and the fact we don’t find out one of the characters is in a wheelchair until the last five minutes, but…its just Craig Sheffer and Meg Tilly! Not since Ethan Hawke in Reality Bites have I hated characters with such passion. Oh well, mustn’t grumble.

Al’s rating: These three so completely deserve each other. I’m just gonna go hang out with their friends while they whine.

Al’s review: There’s a famous scene in Sleep with Me. Not ‘horse head in a bed’ famous or anything, but well-known enough that it makes the rounds on the internet every few months. It features Quentin Tarantino at a house party, explaining the brilliant subversiveness of the script to Top Gun. Top Gun, he proclaims, is not simply about jets and testosterone, but is, in fact, a metaphor for a man coming to grips with his own homosexuality. It’s funny and clever and delivered in Tarantino’s typical 90-miles-a-minute-without-slowing-for-crosswalks style.

It’s a shame that the rest of Sleep With Me can’t keep up with it. The movie’s actual story follows a love triangle of best friends Joseph (Eric Stoltz), Sarah (Meg Tilly), and Frank (Craig Sheffer). As the film opens, Joseph and Sarah get engaged during a road trip after much poking and prodding from Frank. The day before the wedding, however, Sarah admits to Frank that once, a few years ago, she considered going after him while she and Joseph were fighting. This sends Frank spiraling out of control as he wrestles with feelings he thought he had put to bed a long time ago.

It’s a solid romantic comedy premise, marred only by the creeping realization that you want desperately to throttle the characters onscreen. Frank rapidly devolves into an emo schlemiel, vacillating between being anxious, irritable, and creepy, while Joseph and Sarah do nothing but argue and sulk and give each other stinkeyes from across the room until they can barely stand to be around each other. They’re great performances; I just don’t actually want to sit through them.

The good news, however, is that Sleep With Me is from the early nineties, placing it smack in the middle of the Clerks/Pulp Fiction ‘slacker comedy’ boom. As a result, Frank, Joseph, and Sarah have a Greek chorus of loser/philosopher friends who sit around drinking, smoking, and playing poker while snarking about life and relationships. They are funny, weird, and partially composed of Parker Posey and Joey Lauren Adams, so I instantly award cool points. The banter never quite reaches Kevin Smith levels of fascinating banality (ooh, college words) but really does a good job helping you forget that our protagonists are so earlobe-tearingly awful.

So, do I recommend Sleep With Me? I don’t really know. It’s got some funny dialogue in it. It’s got Top Gun being outed in public. It’s got Joey Lauren Adams and Parker Posey. Maybe it’s worth a watch when you’re in one of those moods where you just want to wear lots of flannel and listen to Beck. For those of you who don’t get in those moods? Youtube is this way; check out Quentin Tarantino and Top Gun, and then you can probably get back to your regularly scheduled programming.