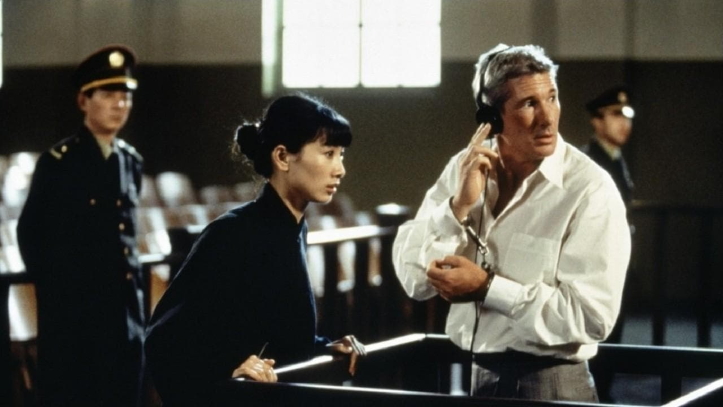 “What are you gonna do? You gonna shoot me twice?”

Sue’s rating: Oh how I long for the good old days — when tigers crouched, dragons hid and Mulan was all grown up and savin’ China.

Sue’s review: Richard Gere, good buds with the Dalai Lama and outspoken supporter of all things Tibetan, has about as much affinity for the Chinese government as I have for customers who pay for thirty dollars of unleaded with plastic bags full of nickels. (Loathe is not too strong a word.) So I have to confess to some idle curiosity about whether the concept for a movie which did not exactly display China in a flattering light preceded Gere’s involvement with the project, or vice versa. But I’m not going to go into a major debate between which came first, the sesame chicken or the egg drop soup, and I’m definitely not going to leap onto a political soapbox, or even get into a comparative religious study focusing on the merits of Buddhism. I just needed an opening paragraph and this was it.

Not too shabby, if I do say so myself.

Red Corner is about an American businessman (Gere) who’s hanging out in Beijing in an innocuous quest for a major contract… which is to say selling quality television programming involving scantily clad beach bunnies to the government run media for distribution to the masses. Improbably, he falls into heavy lust with a young woman who doesn’t speak a lick of English (nor he Chinese) but who persists in sketching unflattering pictures of his generously sized… nose. Y’know, this isn’t exactly the way I’d try to pick up a guy, but since she got Richard Gere and I’ve got bupkus, I’ll refrain from being overly critical. Hey, does this mean I could snag Josh Hartnett if I obsessively drew pictures of his mono-brow? More importantly, can I borrow a pencil?

Anyway, the happy couple hits the sheets and spends some quality screen-time communicating in the universal language. She wakes up rather messily dead (or rather, she doesn’t) and next thing you know Mr. Big Nose is charged with murder and neck deep in a judicial system that isn’t just happy to shoot you in the head, but bills your relatives for the bullet. (Ostensibly saving bazillions of yuan, which are then channeled into cutting edge projects like a space program and maintenance of the People’s Liberation Army water buffalo fleet.)

Enter many courtroom scenes featuring Bao Ling as the inevitable pragmatic defense attorney (they call ‘em advocates) with the hidden heart of gold and Gere as the somewhat rude but understandably distraught accused. After all, he’s never met his advocate before the trial started, and she’s so ready to send him up the river that she has a canoe parked out in the foyer. Figuratively speaking of course.

Adjudicating the case is the Presiding Chairman (we call ‘em judges) who is not only a woman, but in fact a woman who makes Judge Judy look like a valium-dosed Cinderella singing along with the bluebirds. And because China is so big on fairness, human rights and the power of the people, Chairman Judge Judy has a back-up duo of People’s Assessors. The assessors, average citizens possibly picked randomly off the street at gunpoint, aren’t quite a jury, aren’t quite important enough to pay much attention to, but probably have some small say in whether they should shoot the defendant before or after Seinfeld comes on.

Oh yes, and just to make things even more hopeless, pleading anything but guilty is considered offensive to the court. It isn’t nice to offend the court, you know. Even if you’re actually innocent. In fact, being innocent is so impolite that you’ll probably get your rude little self stomped on by genuinely indignant guards for even mentioning the possibility. A high powered defense is more along the lines of, “I’m really sorry. I apologize humbly and sincerely. How I could have committed such a heinous crime when I was five hundred miles away in a body cast after being in a traffic accident that thirty people witnessed amazes even me, but I’m sure I must have done it and boy am I ever sorry. Can I go to the gulag now? Pretty please?

So while the deck is stacked against our hero, it’s the bottom of the ninth with two outs and two strikes, the fat lady has laryngitis, the worm refuses to turn and that dog just won’t bark, rest assured that in the end, JUSTICE will prevail. Or not.

Anyway, Red Corner isn’t a movie that really ever seemed to take off in the public eye, but I sort of like court room dramas and this one had three things going for it in my totally biased opinion. One, it took place is a completely different judicial system than most court oriented movies. Two, there’s a pretty nifty chase scene and some quality time with prison guards to break up any monotony. Three, Richard Gere is totally yummy.

All in all, Red Corner is definitely worth a shot.

But first I’ll need a mailing address for your next of kin.