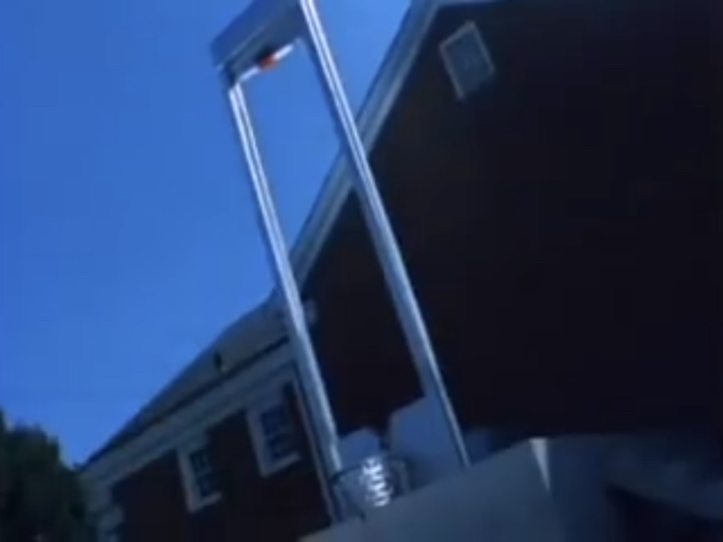 “It’s simple. You can lose your head or you can go free.”

Justin’s review: As we head into the second entry in the Thief in the Night quadrilogy, I feel I must once again point out that these are end times movies made from a specific (and by no means universal in the Christian church) view of the biblical apocalypse. It also married horror, the “Jesus Freak” movement, and rock music in a way that was never done before for church movies. As the first entry proved wildly successful, six years later the filmmakers decided to expand it into a full-fledged series.

Hang on, folks, it gets crazier from here.

Having survived her own death by convenient time loop in the first movie, our agnostic hero Patty continues to be on the run from the one world government (UNITE) after the rapture took up all of the good dispensationalists on the planet. The movie starts with her imprisoned with a whole bunch of new Christians who won’t take the mark of the Beast and are set to be executed. Patty flashes back to explain how she ended up there, which is more for the audience’s benefit than everyone listening in that room. I mean, they were all betrayed or arrested, right? Why is this one woman’s tale any more or less captivating?

A Distant Thunder more or less takes Patty’s struggle with the new world order and her flight from UNITE from the first movie and rehashes it in a longer format. Since we’re in 1978, the hairstyles, outfits, and general home furnishings are far less garish than the first entry — which is easier on the eyes but takes away some of Thief in the Night’s charm.

I didn’t talk a lot about her in the previous movie, but as a protagonist, Patty is as enjoyable to hang out with as a lump of expired bologna. Her defining personality trait in these movies is “being wishy-washy,” occasionally spruced up by randomly screaming at God. She provides a whiny narration for a good portion of the film, kind of wanting to be a Christian but kind of not — and that’s the sort of thing that will lead you right to the guillotine.

That’s right: A Distant Thunder outright executes people via guillotine (in a church parking lot, no less) for not joining up with UNITE. (Rather than seeming like this worldwide menacing presence, UNITE kind of comes off as a jilted ex-lover who’s grumpy that not everyone is on board with its nebulous goals.) In any case, the image of a guillotine in that church legit became one of the creepiest memories from my teenage years.

And did I mention that they make everyone lie there face-up so they have to watch the blade come down? I would have loved to been at that film production meeting where someone said, “Yeah, THIS’LL bring them to Christ!”

Guillotine aside, A Distant Thunder did little to keep my attention. It doesn’t have the weird jankiness that made the first movie so endearing, and it expects the audience to be really invested in the mystery of who will eventually betray Patty to her capture.

What irked me is that, yet again, the approach here is to emotionally manipulate viewers into becoming saved to avoid Bad Things without any real examination of the gospel of grace and forgiveness. The theological discussions in here are so poorly done as to be verbal mishmash, attempting to sound persuasive without making much sense at all. I suppose it’s a glimpse into how end times crazy some people can be in the church — and, let’s be honest, secular society as well — while secretly hoping that we’ll all see it in our lifetime.