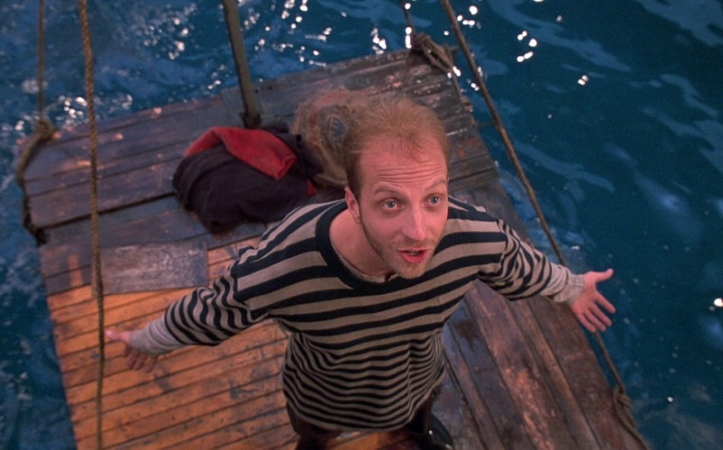 Justin’s Review: Sooner or later, every member of SNL has to have their own movie, and so it was with Chris Elliott. Elliott had his chance in this spectacular remake of The Odyssey that challenges the human spirit and begs for people to reach new depths of cultural understanding.

Or maybe it’s just about a recently graduated “Fancy Lad” whose in a world kind of like ours… but not quite. Elliott plays Nathanial, a snotty wimp who looks down upon everyone and torments them endlessly. Somehow he ends up on a fishing ship instead of his cruise line, and is forced to spend three months with crusty old sea men. As they sail from incident to incident, Nathanial learns what it is to be a fool, and how much better the world becomes once a man helps rather than hurts it. He also talks to a tabacco-spitting cupcake, makes friends with a shark-man, and uses his girlfriend as a sort of jet ski.

As you may have surmised, this film resides deep inside Oddball City.

It’s amusing and quaint, and also peppered with heavy doses of stupid comedy. You know the type, where the main character will resort to drinking fish blood and cleaning a deck with his tongue for laughs. This film also set back the women’s rights movement by about two centuries. Trina (Melora Walters) is the tough, loner woman who is transformed into a literal whimpering idiot when Nathanial beds her. I know it’s very much in jest, but almost offensively so.

If you need a little more convincing, then I shall reveal the film’s huge secret: Ricki Lake plays the figurehead of the fishing boat. Wacky!

Toni’s Rating: Can anyone out there make their shirt twitch lustily like that? Four out of six blue skinned arms of luuuuuv. Five, if you’re me.

Toni’s Review: If you’re wondering about that extra personal point in the rating, let me explain. I am a Burton Groupie, and Tim Burton co-produced Cabin Boy. They could have put a grainy picture of him behind the credits and I still would have given the movie another point.

But if you aren’t blinded into submission by all things Burton, go with the four, because this is one quirky movie and not everyone will enjoy it. Our overgrown brat, Nathanial, mistakenly embarks on a sea journey with a bunch of icky fisherman, eventually tricking the current cabin boy (later tossed overboard by the gods of tasteful dancing) into sailing for Hawaii on a course straight through the Bad Bad Stuff of Hell’s Bucket. Hijinx ensue. And I liked it! I slapped my head a few times at the stupid jokes, had to look away during the chum scene and probably looked like a deer in headlights during other wacky parts… but I liked it!

The sets have that fakey surreal air to them, as do the special effects. The acting is about as over the top as you’d expect. And like I said, the story line is just plain odd. Don’t attempt to watch this with any sort of seriousness because you’ll be forced to turn it off and spend the rest of the evening atoning by reading a bunch of Shakespeare.

Don’t attempt to watch this one alone either. You’ll want to have someone sitting next to you so you can give them that look. You know the look. That wide-eyed wonder that says “We shouldn’t be enjoying this! Why are we enjoying this!? The apocalypse is nigh!”. Just go with it. 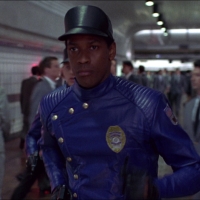