“I told you before — I don’t wanna be part of your super-secret boy band!”

Summary Capsule: Being the world’s most famous superhero has its down side. But then you get to eat donuts and blow crap up.

Drew’s rating: You know, we’ve got an attractive Russian girl in our office who teaches aerobics on the side. I wonder…

Drew’s review: If you’ve been reading this site long enough, you’ll know that I usually have more time for “good-not-great” movies than my peers. Spider-Man 3? Still like it. Ocean’s 12? I wouldn’t kick it out of bed. If I had a nickel for every film I’ve given a positive review to that Justin later lambasted, I’d have, like, fifty cents. (What do you want, these things take a while to put together.) So when I saw that the big dog enjoyed Iron Man 2: Iron Harder, I was stoked. “Self,” I said to myself, “this is going to be great!”

Well, it wasn’t great. Either Justin is sleep deprived (yes) or moving into a new house has me stressed and cranky (also yes), but IM2: The Ironing didn’t connect with me the way its predecessor did. I don’t mean that it was bad — we’re not talking Transformers 2 levels of suck here — it was simply Just Another Superhero Movie. Except I actually connect with most superheroes, so it was more like how I think normal people view Just Another Superhero Movies… not hating it, just taking in the big ‘splosions with kind of a vague, detached enjoyment rather than a visceral “#@&$ YEAH!” Does that make any sense? Is it obvious I’m writing this late at night?

But let’s start with the positives. IM2: Shellhead Lives has (natch) got some great special effects. It’s easy to become jaded because the initial “wow, that armor is AWESOME!” thrill from the first movie is gone, but the tech is still impressive and looks outstanding, even if Robert Downey Jr. sounds less giddy about his no-longer-new toys. Speaking of whom, Downey continues to prove that he was perfectly cast. Whatever faults the movie may have, it’s not on him. In fact, all of the cast members are pretty impressive… individually.

But that leads into IM2: The Final Armor’s biggest pitfall- the actors seem totally disconnected from each other. Maybe some of that is intentional to show Tony’s no longer in tune with his friends, but it never felt like Downey or Paltrow or Cheadle or Johansson were even part of the same conversation, like they each read their lines in front of a green screen and were edited together later. (With the notable exception of Sam Rockwell’s hilarious Justin Hammer, whose interactions with [your favorite character here] were great.) There’s one particular conversation Tony has with Agent Coulson where I swear the two actors were never in the same room together while shooting. Bottom line, when Robert Downey has more chemistry with Jarvis than with Gwyneth Paltrow, that’s a problem.

As another positive, I will say that Tony’s inebriated birthday party was enjoyable if wince-inducing, like a particularly good episode of The Office. Even if they didn’t go the full “Demon in a Bottle” route, they effectively showed (as much as possible without making the star an accidental murderer, anyway) just how scary it is to have the most sophisticated, potentially lethal technology in the world in the hands of a drunk — with great power comes zero accountability. (As an aside, I have to imagine most of Ted Nugent’s birthdays end the same way.) And as expected, the coolest part of the film is when Iron Man and War Machine join forces and fight side-by-side. I’m a sucker for a good team-up and the two have a nice Ryu/Ken vibe going on, though I could live without the super-partner-combo dual Hadoken finishing move… methinks Jon Favreau has been playing a wee too much Marvel vs. Capcom 2. (Shoryuken!)

It’s probably unfair to judge Tony Stark and the Poisonous Pacemaker on its plotholes; I’m sure the original film had just as many, they were simply easier to overlook due to the freshness of it all. And if you’re a bad guy, why wouldn’t you stroll casually down a race track, secure that no car moving at 150+ mph could possibly clip you, that the dozen car pileup you just caused has zero chance of sending a stray tire or bit of shrapnel careening your way, making you look like a (dead) idiot in front of the target of your righteous fury? What is this, a comic book? In all seriousness, it’s still an entertaining movie that you should definitely see. However, go in expecting just a fun superhero romp rather than the breath of fresh air that was Iron Man, and you’re less likely to be disappointed.

(Oh, and Justin? I was not a fan of Iron Man before the last movie came out. But to be fair, I’m not a fan of comic Iron Man now either.)

Justin’s rating: Hey, I’ll take it over Transformers 2 any day of the week and then some.

Justin’s review: Somewhere in the back of my head while I waited for this movie to start was the voice of Nelson Muntz singing “I am Iron Man! Dun-a-dun-a-dun-dun-dun vote for me!” My wife, on the other hand, was having a brain fart when it came to Robert Downey Jr.’s name, and kept muttering things like, “Ridney? Rodney? That’s it… Rodney Jr.!”

It was our first date night since our second child was born, and I think we were both suffering from a bit of sleep deprivation and slight hysteria from being on our own. It’s entirely possible we weren’t even in a movie theater, but some farmer’s field instead, staring at the wheat and saying, “Why does this movie look so grainy?”

Get it? GRAIN-y? I will be the death of your humor, I promise that.

Anywhoo. So we’re back in the domain of Iron Man, a superhero that most folks never even heard of or cared about before a couple years ago, but now 95% of the internet population proclaims they’ve been loyal since a fetus in the womb because that’s the way the internet rolls when something becomes popular. Really, the internet is just high school without hall monitors – peer pressure, dirty writing on the bathroom walls, and geeks being pounded down into the dirt until whatever they like becomes the “in” thing, in which case the jocks pretend like they invented it and the geeks seethe in their basements and start their journey to becoming supervillains.

Speaking of which, unless you consider a rasta-haired Russian and Sam “Crewman Number Five” Rockwell threatening in the least – which you shouldn’t, just in case you need direction on this one – you’re not going to be cowering in fear at the threats that Iron Man faces this time around. But that’s okay, we’re not here for that.

We’ve showed up because Iron Man was a fun superhero flick in an era where every other superhero flick determined that emo moodiness and edgy rebooting was the way to go. Little surprise that the crowds chose to glee about Ridney Jr. being a sarcastic billionaire genius, because at least his character seemed like he was having fun with the superhero thing, whereas Superman and Batman and Spider-Man and Fan-Freaking-Tastic Four were all bemoaning just how hard and lonely and time-consuming and nauseous it was, what with the superpowers and awesome adventures and hot sexy love interests.

Superhero sequels are supposed to be darker and more edgy, with the hero falling off the wagon – in Tony Stark’s case, we assumed that would be literal. Really, the comic character is a chronic alcoholic. But here, Stark doesn’t go quite as dark – he just ratchets up his annoying/amusing egotistical façade to cover up the fact that the metal in his arc reactor is killing him, he’s under pressure by the U.S. government to give up his technology, he still has severe daddy issues, and he has to keep the world safe for peace. It’s a tough gig, but he’s got billions, so it can’t be that bad. In the midst of all this, he’s throwing Stark Expo at what appears to be EPCOT (kids, tell your parents about the Iron Man ride, coming this fall!), which at first doesn’t have much to do with anything, but slowly becomes the focal point as the movie progresses.

Generally – generally – there’s the same spirit of fun, robot tech, hilarious moments and neat character touches that the first movie had. This is a good, good thing. I wasn’t that thrilled with some of the sourpuss characters this time around (Rhodes and Potts seem utterly fed up with Stark, even though they should be his two best friends. They just give him Parent Eyes every time they appear), but there’s more than enough other shining beacons to make up for it.

Somehow, and this is important to understand, it deftly walks the balance beam to the end game without falling into many of the pitfalls that other superhero sequels claim. Pitfalls such as far too many villains (there’s sort of one physical villain and one business rival, but that’s it), going way too dark, being joyless, not progressing the character’s journey, overly relying on all of the elements of the first movie without adding anything new, Chris O’Donnell as a sidekick, etc.

Iron Man 2 has just enough of the familiar and the new, the light and the dark, the whimsical and the pedal-to-the-metal action to keep us entertained. It’s certainly not perfect, but I laughed, cried (unrelated to the movie, but still), and thrilled to the final act. I may despise people like Tony Stark if I ever met them in real life, but as a character in a movie, well, he grows on you. Plus, he eats donuts in the Iron Man outfit, and that’s just something you’d never see Batman do, even on his off day.

Tony Stark: Well, you can forget it. We’re safe. America is secure. You want my property – you can’t have it! But I did you a big favor. I have successfully privatized world peace.

Tony Stark: I told you before – I *don’t* wanna be part of your super-secret boy band!

Tony Stark: [to Nick Fury] I’m sorry, I don’t want to get off on the wrong foot. Do I look in the patch or the eye? Honestly I’m a bit hungover, I’m not sure if you’re real.

Justin Hammer: It’s capable of busting a bunker under the bunker you just busted. If it were any smarter, it’d write a book, a book that would make Ulysses look like it was written in crayon. It would read it to you. This is my Eiffel Tower. This is my Rachmaninoff’s Third. My Pieta. It’s completely elegant, it’s bafflingly beautiful, and it’s capable of reducing the population of any standing structure to zero. I call it “The Ex-Wife.”

Jarvis: May I say how refreshing it is to finally see you on a video with your clothing on, sir.

Pepper Potts: You just peed in the suit.
Iron Man: I know, it has a filtration system, you could drink that water.

Agent Coulson: If you try to escape or play any sort of games with me, I will taze you and watch Supernanny while you drool into the carpet. 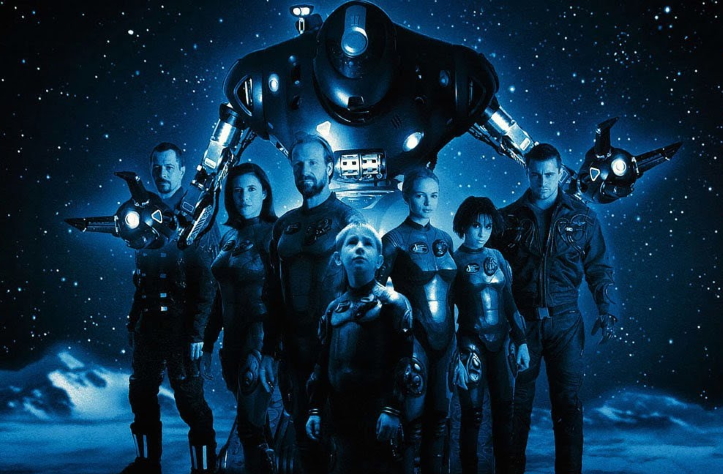