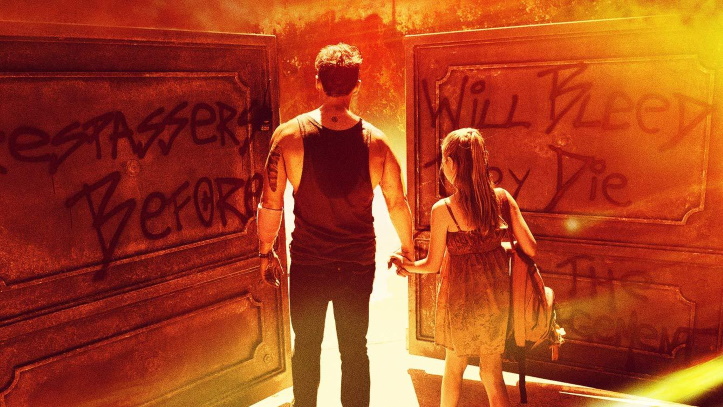 Justin’s rating: The planet may be toast, but Mutant Reviewers lives on!

Justin’s review: It’s 10 minutes after a giant asteroid has slammed into the North Atlantic, sending a cascade of scouring fire and certain death in all directions. On the opposite side of the globe in Australia, the residents have 12 hours before their life is to be snuffed out.

One of these residents is James (Nathan Phillips), who decides to abandon his pregnant girlfriend Zoe (Jessica De Gouw) in favor of attending the greatest party ever in the hopes of deadening himself to his death. Yeah, he’s a total self-centered jerk, and he’s the guy we’re going to follow as the world winds down.

And what a world this is. These Final Hours drops us right into the middle of the apocalypse with no lead-up whatsoever, leaving the audience to deduce and infer the greater global panic from how fast civilization’s gone to seed in Australia. Death and desperation is everywhere, as is hedonism and love. Nobody’s launching any last minute rescue plans, there are no arks to save humanity, Gerald Butler isn’t flying his family to Greenland. The end is a foregone conclusion.

So I guess we can kind of understand, if not condone, James’ panicky decision at the start. But karma bites him quickly, as he’s waylaid on the road and then sees a girl being dragged into a house by two men who are most certainly not her parents. James ends up saving the girl, named Rose (Angourie Rice), and reluctantly becomes her protector and escort in (CUE TITLE CARD) these final hours.

That’s the premise, and it’s a honking good one. James is pulled between his desire to party and his responsibility to find Rose’s family. This mission starts James back on a road to redemption, teaching him to live beyond himself and actually be a father. Perhaps this road may even lead back to Zoe, if there’s still time.

These Final Hours is certainly no happy movie and can be starkly bleak at times, but it doesn’t dwell in the macabre. We just get little glimpses, here and there, that our imaginations can fill in (to our dismay). I appreciated that it was something substantial and honest above “ooh here’s how icky the world might get right before it turns into an E-Z Bake Oven.”

Yet it’s not a movie that I’m going to want to see more than once because it is pretty heavy and not as original as I had hoped. I felt like there would be so many interesting stories unfolding on this last day — and was a little bummed that we got the one that’s predictable and not too surprising.