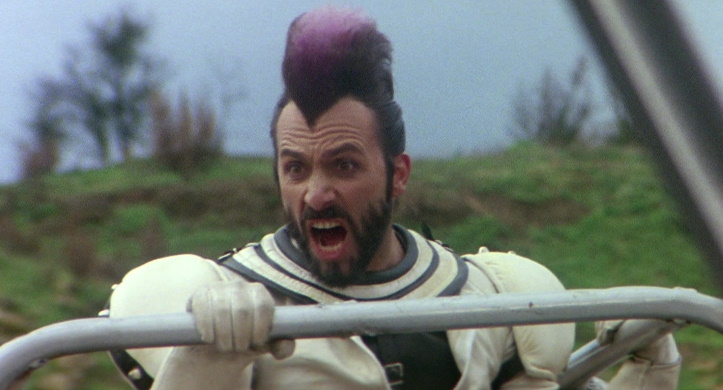 “We guarantee that all humanity, accomplices and heirs of the nuclear holocaust, will be wiped out once and for all.”

Justin’s rating: Warriors of the Wasteland, come out to plaaaayayy!

Justin’s review: We all know that when the holocaust happens, the survivors will immediately divide into three tribes: Those destined to be mutants, those who are going to become mud farmers, and those who will thank their lucky stars that they lived long enough to break out the cosplay outfits, bright hair dye, and modified dune buggies. I’m not crazy, right? You can tell there are lots of people on our street who can’t wait to throw on heavy shoulder pads, pick up a spiked baseball bat, and start grousing about “Outlanders.”

Set in the far-flung future of [checks] 2019, Warriors of the Wasteland (AKA The New Barbarians) is an unapologetic Italian Road Warrior ripoff. So the good news here is that the nuclear holocaust is, finally, over. Took 30 years, but everyone’s moved into the fun part of the apocalypse, where cars are tricked out, wasteland fashion is taking off, and most folks have pledged into their favorite gangs.

Really, there’s just two gangs now: The cruel Templars, led by the fanatical One, and the dorky normies, who are protected by ex-Templar Scorpion. Everyone has laser guns, futuristic shoulder pads, and a whole variety of vehicle accessories for out-and-out warfare. Weirdly enough, the Templars are the ones who sport shiny white outfits and bright silver vehicles, which makes them look like they’re part of an exchange program with an entirely different movie.

Scorpion reluctantly takes on the Templars with his dorky muscle car (that includes a bubble dome in the roof!), a genius child mechanic, and the love of a girl named Alma. The feud between these two groups is all the excuse this movie needs for a host of dangerous-looking stunts and an escalating array of weapons. Whoever was the stunt coordinator for this movie was not concerned with anyone’s safety or providing margins for error.

So yeah, as I said, this is a huge Mad Max ripoff, yet it’s one of those ripoffs that’s genuinely worth seeing. I may actually like this more than the original Mad Max trilogy, and I don’t say that lightly.

The synth soundtrack really jams out some great tunes, the plot keeps moving along at a good clip, and there’s an undeniable style to Warriors of the Wasteland that makes every scene pop. Sure, most of this is just a blatant excuse to do vehicle stunts, but why not? People pay good money to see that at demolition derbies, might as well put it in movies.

There’s some genuine heart put into this low-budget enterprise, and everyone involved — including the props department — seems to be having a really good time. It’s stylish, it’s funny, and it’s got a punchy editing style that heightens every action scene.

As I’ve said before, this collective positive attitude is infectious and makes you want to like it all as much as they do. Fortunately, it’s really easy to develop fond feelings for Warriors of the Wasteland. Now I know what I’m going to dress up as next Halloween.