Event Horizon (1997) — Spaceship goes to hell and back 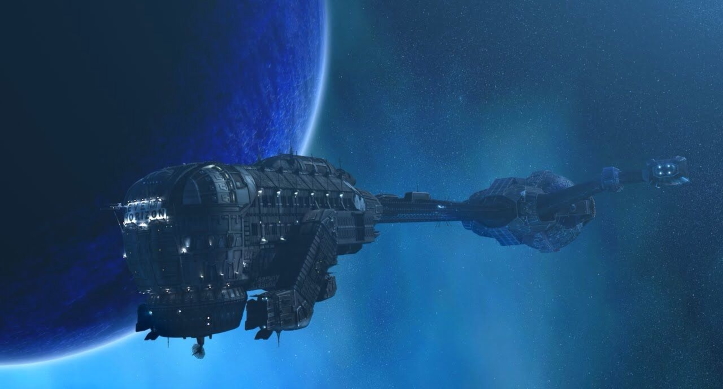 “Where we’re going, we won’t need eyes to see.”

Rich’s rating: I refuse to watch this film on my own; I’m a big wuss like that.

Rich’s review: I both love and hate this film, in a way which is hard to comprehend without understanding the way my mind works — and the last person who tried that… well, let’s just say that he saw the Fava Beans and Chianti open on the kitchen counter, and took his leave.

See, I love horror films; and horror films which scare me – well, they should be my bread and butter. And horror/scifi crossovers with a Cliver Barker-ish feel to them? It could be custom ordered for me.

However, I hate Event Horizon. Because it has all the elements right, and I mean all of them; it absolutely terrifies me. Me, a 27-year-old full grown man can be pretty easily reduced to a mewling frightened kitten simply by putting this video in the VCR and pressing play. There are sequences I watch with one eye through laced fingers. There are sequences I look away from and cringe. I’m getting all goosebumpy just thinking about it now, in fact.

The very first time I saw Event Horizon, I went into the cinema knowing nothing about the film at all. As an insomniac, I’d taken to watching late night showings of movies at the local cineplex with a friend of mine; this particular Friday, having seen everything that we wanted to, went to see Event Horizon based purely on the premise that it had a spaceship on the poster. Looking back, I realise what a dreadful, terrible mistake that was.

My suspicions should have been aroused as soon as Sam Neill showed up in the cast. Hands up, who doesn’t find Sam Neill creepy? I thought not. And having seen In The Mouth Of Madness around the same time, Sam Neill’s presence should have set off my “your brain is about to be forcibly liquefied and dribble out of your cranial cavity” alarms. But no, I soldiered on, oblivious to the horror which awaited me.

See, the deal with Event Horizon (you were wondering when I was going to get round to the plot, weren’t you?) is this: in an attempt to get out of the Solar System, Dr. Weir (Sam Neill) built an experimental ship seven years ago. With a crew of jolly astronauts on board, they set off on the vessel in question, the titular Event Horizon, for a little jaunt around the cosmos, just to make sure everything was shipshape. But when the ship never came back, well, everyone assumed that the navigator must have had the Fish for his in-flight meal, and the expensive ship was lost forever.

Dr. Weir’s life goes down the tubes faster than the suction flush on the space shuttle, and to top things off, his wife tops herself off in the bathtub. Poor, lonely, insane Sam Neill. Oh, did I mention that we learn in the first 30 seconds of the film that Dr Weir hallucinates his dead wife in his dreams? And yet, I still didn’t figure out this film was set to squish my manhood and reduce me to a cowering wretch in the space of a couple of hours. What a blind fool I was.

However, all is not lost in the life of Dr. Weir — because amazingly, only six years and 10 months overdue, the Event Horizon suddenly appears around Neptune, broadcasting a distress signal. Obviously, the guys who bought this big hunk of metal are keen to know what happened, so Weir and a salvage crew lead by Captain Miller (a pre-Morpheus Lawrence Fishburne) are sent out to check out the Event Horizon and figure out what happened.

However, all isn’t quite as it appears to be with the good ship Event Horizon; as the salvage crew soon discover when they realise that the interior decorators of the Event Horizon have remodeled the entirety of the inside with an interesting new wallpaper called “Dead Flesh of Former Crewmen”. Martha Stewart, eat your heart out. By this point, I’ve twigged that this isn’t your normal sci-fi flick; however, I’m also pretty much hooked into the movie now.

Now, were I the salvage crew in this situation, I’d be hauling ass away as fast as my ship could carry me. Trouble is, these crewmen are pretty devoted to their jobs. Oh, and their salvage ship has had kind of an accident, so they need to make some repairs. And remember Sam Neill? He’s also going totally fruit loops right about now, making Cpt. Miller and his band of merry men’s jobs even more difficult.

From this point on, the film is a paranoia scare-fest in outer space which just doesn’t stop. Disturbing imagery? Check. Creepy lighting, creepy soundtrack, sense of impending doom? Right here. People gouging out their own eyes? Oh, baby, this film has it all!

Its scary and creepy; the ship itself looks like someone took a gothic cathedral, made it out of skin, and put it in space. Sam Neill is the scariest man alive, and the screenwriters do a great job of writing so many absolutely horribly scary situations that at least one of them is bound to make you go “urgh.” The salvage crew are kinda vanilla, but since they’re only in the film mainly to go insane or die in interesting and gruesome ways, we can forgive them that. After all, who wants to spend 25 minutes examining in detail one of the characters relationships with the rest of the crew, and his family history, only to have him blasted out of an airlock 28 minutes into the film? I thought not.

Don’t expect this to be clever or deep; scratch the surface, and its really just The Amityville Horror in space with a Hellraiser motif, but there are no glaring flaws either. Watch this film with the lights off, on your own, and I guarantee you’ll be sleeping with the nightlight on and a gun under your pillow for a few nights afterwards.

Shalen’s rating: Zero out of one bad Shining homages. Gallons of blood, indeed.

Shalen’s review: I’m noticing that when I write these reviews, I almost always mention one or both of my siblings. This is not accidental. My siblings are my best friends, first of all, and second, I watch more movies with them than anyone else. This is particularly true in the case of Sib2 and horror films, which brings us to today’s entry in the ongoing adventure of Mutant Film Reviewing.

Self and Sib sat down last night to watch this one over dinner. After having read the Mutant review of this film, I was expecting something really terrifying, something as gory as The Thing and as stylish as Aliens and as scary as… Hmm. You know, I’ve never seen a really scary movie set in space. I mean yes, Alien was violent, and almost everyone in it dies, but that doesn’t make a film scary as such, particularly once one builds a tolerance for such material.* Scifi horror is tricky to do, because you have to either omit supernatural elements, as Alien does, or mix technological and supernatural elements, which is almost invariably going to fail.

This film had some potential. Listening to the setup and watching the trailer, it really looked like it could be scary. Then I started actually watching it. The opening expository segments are rather obviously just that, and when we’re introduced to the cast (including those who will survive the movie) there is not much success in making us care what happens to them.** The instant you see the tension between Laurence Fishburne and Sam Neill, it’s fairly obvious that one of them is going to flip out before the end of the film, and the only question is which one is going to try to kill everyone and which one is going to turn out to be noble and self-sacrificing. And the fact that Sam Neill’s scientist keeps seeing his naked dead wife tends to provide a clue.*** Up until things get freaky, his character mostly spends his time looking wild-eyed and providing plot exposition, sort of the way he did in Jurassic Park and Merlin.****

And what about the horror elements? There is a certain horror to the idea of dying in space, out in the endless cold and the dark. Unfortunately, that was explored far better in 2001: A Space Odyssey than it ever is here, although 2001 was not a horror flick per se. There’s that good old “you would implode if you jumped out an airlock” trope so beloved of science fiction writers, and there’s the idea of drifting endlessly until your air runs out, but those are slow-burn kinds of fear. They don’t mesh well with the over-the-top Goth Disco look inside the Event Horizon (the titular doomed spaceship), all blackened spikes and neon strobe lights, nor with the equally over-the-top images of Dantean torture and mutilation of the flesh that appear as the film goes on. There’s also the fact that, unlike the interiors of the Lewis and Clark, the Event Horizon is far too large to maintain the fearful claustrophobia this film really needed. Oh, the director tries with having people crawl into vent spaces and crowding rooms with sharp metal things, but like so many things in this film, it doesn’t quite work.

I could also stand to have a few more things explained in more detail. Neill’s character was aiming for Proxima Centauri, right? How did he get the coordinates to his Madeleine L’engle wrinkle-in-time tesseract device so messed up that the ship went to Hell when he’s supposed to be such a brilliant mathematician? What the heck does the “living” ship want another crew for when it killed the first one? Why is Sam Neill’s dead wife, in life a harmless individual who killed herself and no one else, afforded such status in the people in Hell category? How is that reality so connected to this one as to allow for his pre-ship visions and the “twist ending?” And why, most importantly, does only some of the crew have the Hell-visions once everything starts going down the tubes? That could really have been explained more, or at all, for that matter.

In the end, if you’re not floored by the awful images***** to the point that you miss everything else, there’s not much to this film.

*Just check out Roger Ebert, whose skin is now so thick it can repel small-caliber bullets.
**This despite the presence of Jason Isaacs AND Sean Pertwee, both of whom were in Soldier, one of my favorite movies of all time.
***These scenes are frightening only if you do not know that every singly time a horror filmmaker shows you a woman speaking with her back to you, there is going to turn out to be something wrong with her face.
****A film which was fully as horrifying as this one for entirely different reasons.
*****And if you’ve seen The Thing, watching a guy try to hand you his eyeballs is a picnic. Likewise if you have Goth tendencies and tend to come up with these images on your own.