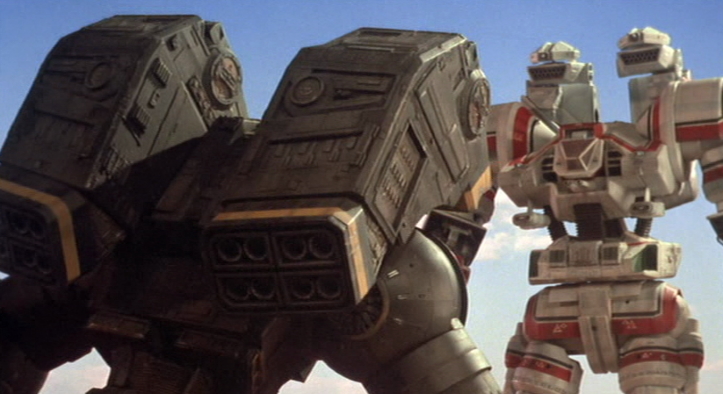 Justin’s rating: So is this where Hackers got Crash and Burn from?

Justin’s review: Apparently all it took for a mere nuclear war to get war outlawed on Earth, which is something governments can do, apparently. So now to settle disputes, the world’s gone back to the ancient system of having gladiators duke it out for their respective country’s honor (and territory) in an arena. Only that in Robot Jox, they do it with towering weapon platforms on loan from Battletech.

Basically Top Gun with ‘bots instead of planes, Robot Jox centers on a struggle between Russia and the west to control Alaska (this was made during the waning hours of the Cold War, so it helps to view it with that in mind). The good guys’ Archilles (Alien Nation’s Gary Graham) is their last, best shot at keeping all of that precious moose and oil. In a brutal match against the Russian combatant Alexander (Paul Koslo), an errant rocket fist sends Archilles’ mech into a bleacher and smooshes 300 people.

Horrified, Archilles announces his retirement, and replacements are hurried to get battle-ready. Among the new class of Jox is Athena (Anne-Marie Johnson), a genetically engineered human designed for the arena. Also, she’s a woman, a fact that the movie finds endlessly fascinating. But no matter who steps out against Alexander, the good guys are at a disadvantage due to a spy leaking information about their equipment to the Ruskies.

Now in the era before CGI could make giant mech movies like Pacific Rim commonplace, there really was only three ways to portray 20-story killing machines. Either you went with animation (as with Robotech), stop motion, or slapped actors into robot outfits. Robot Jox went with a combination of these last two methods and does a fairly good job to deliver on the slow and powerful brawls on this scale. It’s only too bad that most of the robot action is confined to the start and end of the movie, with the middle muddling about with smaller, fleshier, and less appealing meatsack. Meatsox?

It isn’t something you’re going to trot out for the characters, the quotes, or the Shakespeare-worthy story, but Robot Jox keeps things lively with its weird version of a post-apocalyptic future. There’s some crazy training sequences, goofy futuretech, corporate sabotage, and all sorts of swagger and posturing from the Jox. You can see how this movie, which didn’t get a theatrical release, gradually made a name for itself on video in the early ’90s. I mean, it’s giant robots punching, lasering, and blasting each other to pieces. There isn’t anything else that such a setup requires to be entertaining — at least not for a 1980s movie that was inspired by Transformers (seriously).

Robot Jox unfortunately bankrupted its studio, which is a shame because it was supposed to kick off a film series that would’ve continued with the Jox fighting against alien invaders. And you know that would’ve been all sorts of amazing.

Honestly? I’d rather see this kind of old school effort with all of its sincerity and clunky effects than all of the bland and soulless CGI movies of today. If that’s you, too, you’re going to want to dip into Robot Jox at some point in your life.