Star Trek: The Next Generation: A Klingon Challenge (1993) — A VCR board game review 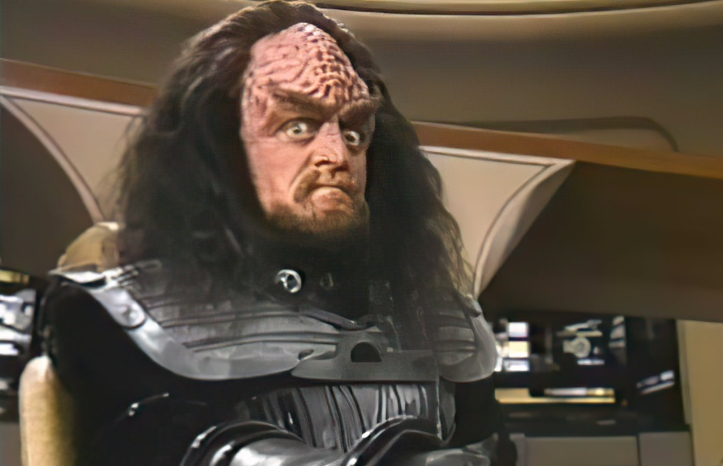 “It is only a Federation illusion, unlike the Klingon reality that awaits you!”

Justin’s review: I’m always up for an out-of-the-box experience here at Mutant Reviewers, and it’s been lurking in the back of my mind that I should check out some of those old VCR board game movies. These were a short-lived fad that attempted to spice up party board games with actors hamming it up on screen and shouting instructions. There’s some limited interactivity with these that mostly involved going forward or backwards to certain time codes.

So why not jump into a few of them here at Mutant Reviewers? I figured I’d tackle an “episode” of Star Trek: The Next Generation that I’d never seen before — thanks to the board game exclusive format — with “A Klingon Challenge,” which came out in 1993. Hoo boy, I am excited!

Using stock footage of the Enterprise, a series of eerily empty sets, and a “they’re not paying me enough to actually appear on screen” voiceover from Jonathan Frakes, we’re told that the ship is undergoing repairs at Starbase 74 for computer malfunctions. Everyone is off the ship — all one-to-six thousand of them — except for a skeleton crew (the players). Riker says the computers are all offline, although the sets show a lot of the consoles lit up, so whatever.

Anyway, a Klingon named Kavok (played by Star Trek veteran Robert O’Reilly) beams onto the ship (from where? how?) and takes it over… even though the computers are offline. He then punches two buttons in engineering and the Enterprise flies away from the starbase with rather horrible special effects. Kavok doesn’t seem too perturbed that other people are on the ship, even as he warps it toward Klingon space to fake an attack and spark a new war between the Feds and Klingons.

Kavok rather loves to monologue his evil plan (gee, hope nobody’s recording this for Tik Tok or something). To pass the time, Kavok raises a “true challenge” for the players to access five levels of the computer. A one-hour timer starts counting down on the screen (with warp stars), and every so often Kavok pops up to torment whichever player is currently moving. Basically, it’s like a screensaver that occasionally chastises you. At one point, a weird distortion effect speeds up the time for a bit and prompts Kavok to beam to the bridge. It’s plot development, so take it when you can get it.

The game — and video — is usually remembered today for Kavok’s repeated phrase, “Experience bij!” This meant to take a punishment card, and probably wouldn’t be so notable except that he says it about six dozen times over the course of the hour.

While Kavok’s over-the-top and stereotypical Klingon performance is amusing, I have to imagine that actual Next Generation fans would be disappointed to come to this game and see nary hide nor hair of the actual cast. It is interesting as a relic, and marks the first time I’ve ever sat through a full VCR board game movie.