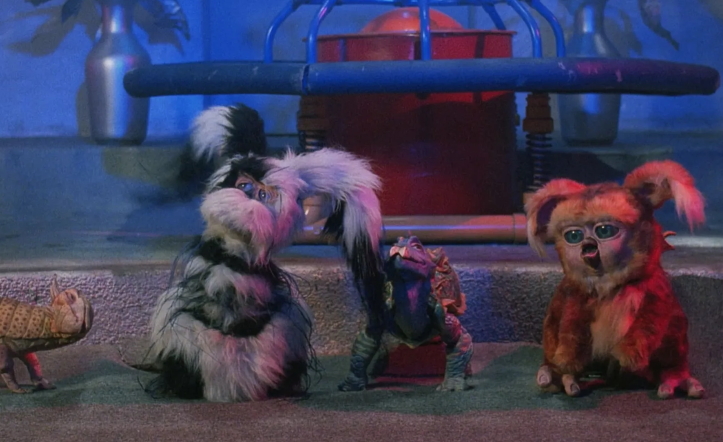 “I’ll set you up with a real special pet… for free.”

Justin’s rating: This whole movie needs to be put down

Justin’s review: When it comes to movie reviewing, curiosity tends to bite you more often than not. But I can’t help it. I really can’t. When I saw that bad movie factory Full Moon Entertainment had a children’s label — Moonbeam — I had to know what it was capable of making of your basic kids movie.

I got bit. I should’ve known better.

Pet Shop is a perfect encapsulation of everything that is wrong with everything that tends to be wrong with kids movies. It’s got a plot that’s as deep as a puddle on a 100-degree day, acting that is hammier than Porky Pig, a soundtrack that shoves “whimsy” down your ear-holes, and jokes that are more funny in theory than in practice. If I was assigning a director with the task of making a genuinely good movie for kids, I’d hand them a copy of this with the instructions, “Make the opposite of this.”

Pre-teen Dena and her family are relocated from Brooklyn to a western town called Cactus Flats, Arizona by the witness protection program. All you need know about this place is that it has the fakest cacti that the props department could find, identical generic signs over every store, and aliens. The aliens are new, having come down via bad special effects and taken over the local pet store. They’re disguised as cowboys, which may sound slightly cool until you see what they look like:

Anyway, Dena makes best friends with Mike, and there’s that sort of pre-pubescent puppy love (ahem) that movies never know how to do without making it awkward all around. What brings them together is a desire to own a pet. Dena is lonely after the move, and Mike is obsessed with the idea of owning a turtle. REALLY obsessed. It’s like every third line with this kid: “Turtle, turtle, turtle.” I don’t know why turtles are such a big draw with him, but they are.

So along with some other kids in the town, Mike and Dena accept some free pets from the alien cowboys. The pets are also aliens (stop motion and puppets) who transform into ordinary earth critters for a time. The whole plan of the cowboy aliens is that they give out the pets, and then wait for the kids to come back to get “vitamins” for the pets. At that point, the children are abducted with the purpose of auctioning them off into alien slavery.

Why don’t the aliens just nab the kids right away? Why the whole pet shop facade? No idea, other than to give child actors a chance to act awed at Furbies twitching on screen.

Since this movie would bore kids even if it was a choice between this or homework, the only real reason to see it is for the critter effects. They’re fine, I guess, but certainly nowhere near as fun as the brief glimpse of the alien menagerie in Flight of the Navigator.