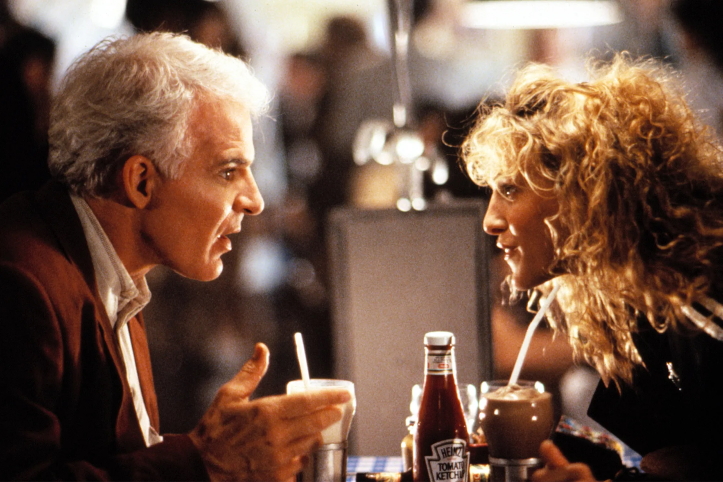 “Let your mind go and your body will follow.”

Kyle’s review: This was one of the first films I walked with my mom to see at the new $1 admission movie theater they built by my house back in Colorado. The movie was great, and the theaters were cool and had the pleasing “new theater” smell. Today, the movie is still great and the theaters are a $3 gang hangout. Thank God I moved!

Back to L.A. Story: I saw this before I entered high school, and it was not only wonderfully wacky but it also served as a motivational reminder that there was plenty of new unknown stuff out there for me to pursue and learn. A lot of the satiric humor flew right over my head on the first viewing, probably because Steve Martin’s jabs at Los Angeles and its (lack of real?) culture are a little too refined and New Yorker-ish for young punks to catch. But I still dug the humor I did get and after years of viewing I now recognize and appreciate all the biting humor L.A. Story has to offer. Plus, it was my first exposure to artiste extraordinare Enya! God bless you, Steve Martin!

L.A. Story is best described as a modern Shakespearian tale of cosmic significance centered on the most favored of all Shakespearian characters: the philosopher fool. That’s what I am, and that’s what Martin’s wacky weatherman is. Equipped with a Ph.D. in philosophy that doesn’t quite apply to the zaniness of his job, Martin is left to analyze and bemoan the intricacies of L.A. quirks to a self-absorbed girlfriend and a unamused cat until his life gets a breath of fresh air from overseas in the form of a pleasantly eccentric English girl (Victoria Tennant). Of course, she has to deal with her screwy ex-husband (Richard Grant is cool!) and Martin has to deal with the hot pretty young thing (fabulous Sarah Jessica Parker) he somehow picked up along with new pants at a hip L.A. clothing store. Can Martin and Tennant find true love with each other? Is true love possible in oh-so-shallow Los Angeles? How does Enya and a communicative road conditions sign fit in to everything? Watch and find out!

Martin is absolutely perfect for his role, which makes sense since he wrote the script. The rest of the cast is pretty cool, especially the perky Parker as a young aspiring spokesmodel with a yen for high colonics. The story is fabulous as well! It’s half-romantic date movie and half-metaphoric Enya-fueled sci-fi existentialism. I always knew Los Angeles was alive and self-aware! That’s why I moved here!

Seriously, L.A. Story is quite the clever doo wah ditty and even if you don’t live in the “Golden State” you can still appreciate all the wacky L.A. shenanigans. Just picture me in the Steve Martin role and it will make for even more fulfilling viewing! Enjoy! Just don’t move here, there’s enough freaks out here as it is. No offense.

Nancy’s rating: My heart, it soars, like a shooting star, highway sign, whimsy and kooky romance of greatness!

Nancy’s review: This delightful little tale is my definition of a perfect love story. I would go so far to say this is, in fact, MY KIND of love story. I know that phrase gets tossed around a lot. People watch Sid & Nancy, perhaps, stand atop their chairs, raise their fists in the air and scream THIS IS MY KIND OF LOVE STORY! Other films that evoke this sort of reaction — The Nightmare Before Christmas, Harold and Maude, The Incredible True Adventures of Two Girls In Love, and so on, and so on. These flicks appear to a certain cultural group, and make folks feel warm and safe and cuddly with their idea of love, even if they don’t fit in with the regimented love story. So for me, I guess the demographic I would fall under is kooky, flimsy romantic. And straight-up, it’s my kind of love story because it’s both of those things, without being self-aware.

So I came into this movie with my pal J-Rage coming over and saying “Screw The Poseidon Adventure! We are watching this!”. I was mildly bitter-bitter, I admit, because I had invited the gentleman over my house to watch Gene Hackman fight the good fight against… water I guess, and now he was destroying my happy day plan. However, this skeptical nature didn’t last for long. The movie was rocking my world in the first ten minutes. It was just AMAZING how quickly it made me laugh and smile and scream “THAT’S SO COOL!”. First time my jaw dropped and I was filled with joy: Steve Martin’s character, Harris, makes a detour to avoid traffic, happily bouncing through neighbors yards and crashing down barricades, as people watch and wave, as happy music plays, as Harris has the most nonchalant, “I’m-going-to-work” expression on his face. Yeah I know. It’s great.

I see it as a little tale about knowing where your heart lies and wondering how to get there. Harris runs the show as the “Wacky Weatherman” with a snappy, materialistic girlfriend whose not that great. Life’s not super awesome for this cat until he meets the wonderful woman of his dreams (Victoria Tennant). Which brings me to another reason why this is my kind of love story – because she’s not AMAZING. She seems like a cool, smart, way English lady, not too special but he grows mind-bogglingly (word?) in love with her. And that’s precious and it makes my heart soar, damnit!

But back to the plot. So he toils around in his life, does quirky things, says quirky things, and he’s not real sure how to get this woman of his dream into his life. He comes across Sarah Jessica Parker as well, and that turns into her being his other sexy spunky loooooove. Also, his English love has to deal with a nutty ex-husband (Richard Grant, as one of the funniest characters I’ve ever seen. The way he interacts with other character is fantastic!) who just wants her back. And that’s just basic plot! I haven’t even begin to get into the shenanigans that make this movie great.

Little bits of philosophy are thrown in, some so subtle and others sooo blatant (“If I may quote the great philosopher….”). Lines like that come around quite often in this film. (Disclaimer — not an actual quote). What I love is the working-in of fate. As I said, to me it’s about knowing what you want and not knowing how to get there. This movie serves as an easily-digestible but no less poignant reminder: Through highway signs and cars that drive themselves, fate will work it’s way in and love will find a way. And that. That, my good friends, makes MY HEART SOAR.