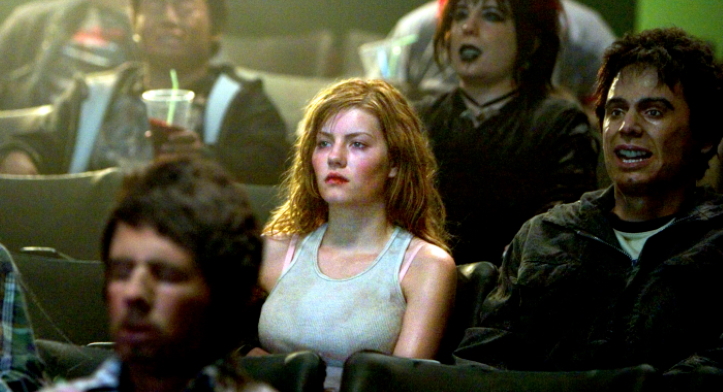 “Everything, this whole building: It’s all made of wax!”

Kyle’s review: I’ll pretty much see any horror movie. Especially if it’s a well-done one, and Dark Castle won me over with House on Haunted Hill and Thirteen Ghosts (I haven’t seen Gothika or Ghost Ship, but they’re probably at least passable). So I knew I’d put my cute butt in a seat on opening day for House of Wax. And Elisha Cuthbert (from 24, yeah!) as the main character was icing on the cake.

The promise of Paris Hilton wasn’t promise of anything at all, really. It’s hugely amusing how fans and the movie studio are playing up the bloody death of Paris’ character (uh, spoiler, I guess?), but I was more concerned that she would be a horrible addition to the cast. Don’t worry: she’s not that bad. As a horror film “best friend” character (gee, will she survive?) she’s actually pretty good. Some of the multiple in-jokes regarding her other hit video (hint: some of us, like me, watch it every night) are amusing. Nice work!

In the end, House of Wax isn’t anything great, but it’s worth seeing if you derive fun from slasher movies. I’m sure the Vincent Price original was much better (haven’t seen it) but I was impressed by this film’s attempt at some fresh, new takes on the same, tired “bunch of kids get stranded in a horrible abandoned place with psychos who have a specific and marketable kink in their repertoire (covering their victims in wax and putting them on display in their house of wax).” That said, a lot of this is the same old boring, predictable crap. But at least Elisha, and even Paris, look good.

Actually, Wrong Turn did most of this, minus the wax angle, a whole lot better. See, House of Wax is good, and makes up for its lesser elements (stalk sequences, character stupidity) by being brutal, especially towards poor Elisha. But it’s another story where stuff would go a whole lot different if its characters were a little less trusting, a little more street-wise, and a lot more dedicated to their own survival. Religious issues aside, listen: if you’re EVER in a slasher movie situation and you manage to get a murderer subdued and near-death, just kill the bad guy/girl. Seriously! There are commandments and stuff against it, but if you’ve got a psycho after you and you’ve got a chance, just tap into that old red rage and go nuts. Or maybe you should try to rehabilitate them.

Yeah, House of Wax is stupid, but fun stupid. There are fingers snipped off (ouch!), lips glued shut and then torn open (painful!), and people boiled alive by being covered in boiling wax (goo!). Elisha is awesome, Chad Michael Murray is okay as a “tough” and “roguish” twin-bro-of-Elisha who’s out on bail for car theft. Paris is surprisingly fun in her role, and the kill scenes are cool. I don’t know, though. I’d much rather you check out Wrong Turn, though. The characters are smarter and more clearly determined to survive, and the brutality is more true to the bad guys. I don’t know if Elisha beats Eliza Dushku, but it’s something I’ll be thinking about for the rest of the weekend. Awesome!

And just so you don’t think this is a thinly-veiled review for Wrong Turn instead of House of Wax, let me say this: Wrong Turn kind of peters out at the end, whereas the melt-happy finale of House of Wax is pretty intense, crazy stuff (all things wax + out-of-control fire = good times). And the characters have semi-good instincts (and when Elisha gets mad, she gets really mad) and aren’t completely stupid; only occasionally do they do really dumb stuff like forgetting they’re in mortal danger and standing in a spot where they’re 100% vulnerable to the killers coming up the tunnel behind them. But you won’t notice because you’ll have one very important question in your head: Where the hell do the bad guys get all that wax?