Monkeybone (2001) — The stuff of cinematic nightmares 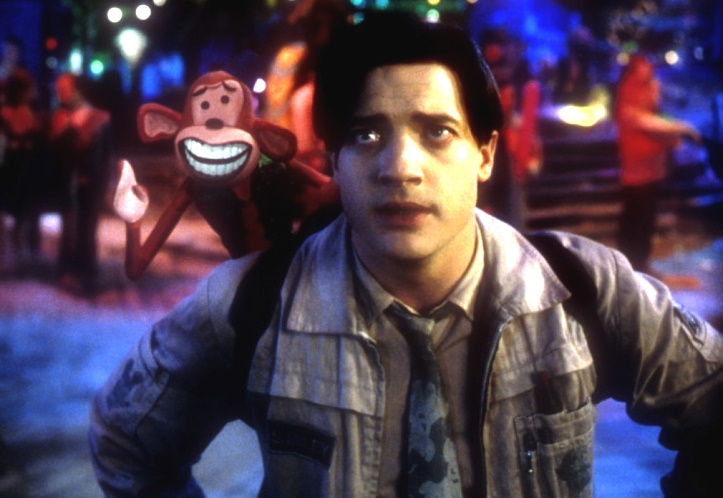 “Excuse me kitty. I’ll be right back after I choke my monkey!”

Justin’s rating: I mean, it’s not as bad as Apecartilage

Justin’s review: In 2021, there’s been a fascinating resurgence of love and support for Brendan Frasier. Frasier, who was the backbone of many of our comedies and adventure films in the ’90s, strangely faded from prominence in the 2000s. The ensuing two decades saw some attempt to recapture his shining star, but several underperforming movies, health problems, and some very tragic personal issues that you can read about elsewhere drummed him out of the limelight. By all rights, Frasier should’ve been forgotten about by now.

Except that some people remembered. And they remembered hard. They remembered this incredibly likable actor who was a staple of many of our childhood and college-era movies, and they rose up to say in one voice, “We love you, Brendan Frasier!” Honestly, it’s been touching to see.

For me, Frasier will always be the hero of fun ’90s movies like Airheads, Encino Man, With Honors, Blast from the Past, and The Mummy. But, of course, he’s done some… stranger… stuff over time, and I thought that we might as well dip into one of his oddest entries, 2001’s Monkeybone.

And odd this is. Too odd for the average moviegoer, who had no idea what to make of it.

Cartoonist Stu Miley (Frasier) lands in a car accident-prompted coma just as his career starts to take off. Not dead and therefore not sent to the land of the dead, Stu ends up in Down Town instead. This is the realm of nightmares, and Stu’s creations have proved to be quite popular there. Chief among these is his hit cartoon Monkeybone, a stop-motion animated monkey voiced by John Turturro.

With the clock ticking down to eventual brain death, Stu quests for a way out of Down Town and back into the land of the living. And while that synopsis seems straight-forward, the actual events are anything but.

Let’s see… Stu makes friends with a girl kitty (Rose McGowan), robs Death (Whoopi Goldberg), gets imprisoned with Stephen King, and has his comatose body taken over by Monkeybone. Monkeybone is working for Hypnos, the God of Sleep, to drug the living and make them come up with even more nightmares. So Stu has to thwart this and earn an exit pass back into his body so that he can resume his life and propose to Bridget Fonda, another ’90s staple that disappeared in subsequent years.

From a purely visual perspective, Monkeybone isn’t boring. Down Town is populated by all sorts of bizarre creations — mostly going with stop motion to realize them — that would look at home in Tim Burton’s mental basement. The problem is that for all of the creativity and thought that was put into costume and creature design, nobody decided to come up with a more cohesive plot. Or, for that matter, actual jokes that play to Frasier’s strength. Monkeybone (the monkey) isn’t funny at all, and Frasier simply looks worried and lost for most of the running time.

I mean, for every Who Framed Roger Rabbit or Space Jam, where they actually pulled off this human/cartoon interaction, there was a Cool World or Monkeybone. This doesn’t work, too often coming off as weird for weird’s sake rather than for a purpose. What happened next anyone could’ve predicted: This $75 million (!) act of lunacy didn’t even clear $8 million at the box office, and Frasier’s star took a considerable hit.

I wish I could say that Monkeybone at least earned the status of a cult favorite in the following two decades, but I’d be lying. I mean, who ever mentions this movie? What’s here to really champion? I love Frasier, but man, this was a bad call all around.