Enchanted (2007) — When a Disney princess vacations in our world 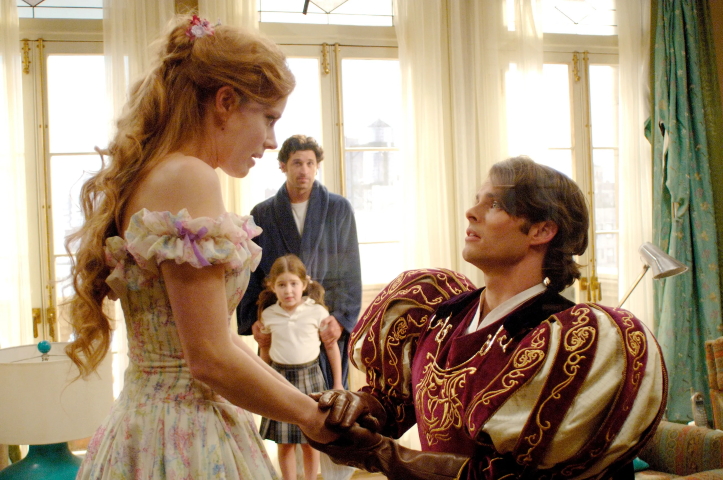 “It’s just that… it’s like you escaped from a Hallmark card or something.”

Justin’s rating: How do I know she loves me? Because I got Ghostbuster gear for my birthday, that’s how.

Justin’s review: At the end of a marathon four-parks-in-four-days Walt Disney World tour, my wife and I were about as inundated with the Disney spirit (or “evil corporate brainwashing”, depending on your level of cynicism) as was possible. So there really wasn’t a choice as to what new movie we were going to see that evening at the theaters — it had to be the new Disney musical/animated/live-action blend Enchanted.

And after four days of bright colors, fairy tales and the goofy Disney religion (which is, I suppose, “Feel good, play nice and pay $45 for plastic souvenirs”), we just about spewed during the saccharine opening moments of the film, where an animated Princess was singing to her enslaved flock of animals about True Love. Because if there’s a high deity on the Disney chain, other than money, it has to be True Love. “True Love.” What does that even mean in this context? Wide eyes, perfect chance meetings, a romantic medley sung against the backdrop of a picnic in the park, and a magical kiss that solves every problem — even upper lip hair for the girls?

Whereas Shrek was forthcoming about its fairy tale lampooning, Enchanted is more sly as it twists the three-quarters of a century of Disney tradition into a film that’s parts mocking and parts sincerity. Once you get past the initial sugar shock of yet another doe-eyed waif singing to forest critters under her thrall and a prince in tights coming to her rescue, Enchanted dumps the tradition on its head by transplanting all of its characters into modern-day New York.

What didn’t quite work in Cool World is a subversive bliss here. Giselle (Amy Adams) is unceremoniously dumped onto the rough streets of the city with nothing but the power of unbounding glee and the ability to call animals to do her bidding. She’s befriended by Robert (Patrick Dempsey), a divorce lawyer and yet another single Disney parent (“Happily Ever After” in a Disney flick requires some poor spouse to die horribly a number of years back). As Prince Edward (James Marsden) pursues her from the animated world and Nathaniel (Timothy Spall) tries to keep the couple from reuniting, Giselle gets a crash course in Real World 101.

The charm of the movie is that as much as Giselle is learning how tricksy life and love can be outside of a picture-perfect Disney animatronicon, she’s also bringing something into our world that is sadly lacking in so many places: Unironic optimism, abject horror for the epidemic of divorce, and cockroach mind control. Robert might be world-weary and “realistic,” but his developing relationship with Giselle reignites hope and belief in actual romantic love.

It’s a truly funny — and fun — movie, with excellent musical numbers and sly jabs at Disney mainstays. A Disney fanatic could keep themselves occupied for a long time trying to identify all of the homages and references to older flicks held here, but the rest of us are welcome to lose ourselves in the silly fluff of it all.

Lissa’s rating: Wish cockroaches and mice and pigeons would come clean my house. I don’t care if they’re vermin — I will never turn down free housecleaning.

Lissa’s review: It has princesses, music, and satire. Did you think that this might be a bad review? Well, hi! Welcome to Mutant Reviewers and have fun looking around — it’s always great to have some first time readers. That’s really your only excuse for not thinking that I would like this movie.

Okay, so I lie. I didn’t think I’d like this movie — at least, not at first. Why not? Because the trailers just showed the princesses and music, and left out the satire part. This is important, because I thought the trailers made the movie look really stupid. Then it started getting really good reviews. Then I started knowing guys that liked it. So, I decided to give it a chance, and I’m really glad I did.

On the surface, Enchanted is a pretty cheesy movie. The animated princess Giselle (voiced and later played by Amy Adams) meets the love of her life — the handsome Prince Edward (James Marsden, aka Cyclops from X-Men). However, the evil stepmother (Susan Sarandon) and her henchman (Timothy Spall, who I didn’t realize was in this but recognized immediately from his animated character alone) pushed Giselle to a “place where there are no happy endings”… Manhattan.

Haha, right? And of course, Giselle meets Mr. Embittered Divorce Lawyer Robert (Patrick Dempsey), and reintroduces him to the meanings of happiness and love and all that. In some ways, let’s face it — Enchanted is completely predictable, especially in its plot. However, Enchanted is pretty predictable because it’s half-beloved fairy tale, half-parody. And really, the characters, especially Giselle, are so likeable that you really want it to end the way it does.

What makes Enchanted stand out and actually be good is the satire aspect. Really, someone with a sense of humor got a hold of this script, and I’m really glad they did. From Prince Edward’s wide-eyed conviction that the television is a magic mirror to the numerous jabs at Disney princesses, I was chuckling through most of the movie. (I especially liked Judy Kuhn’s “You’re too late” line, which had me howling on the floor.) Granted, I believe that sarcasm and satire are some of the highest, not lowest, forms of humor known to man, so take that for what it’s worth.

But aside from being funny, I really liked a lot of the message, too. As much as I love my Disney princesses, I have to admit that most of them (Mulan very much excluded) don’t do much for me on the feminist forefront. At best, they have pretensions of feminism, and at worst, they wait for their prince to rescue them. I like that Giselle learns that love isn’t usually at first sight, that a woman can kick butt, and that being saved doesn’t mean that you’re soulmates forever. While Giselle does save her man, she also starts to understand what a real relationship is, and I liked that. (I also liked what happened to Edward and Robert’s fiancée, because that was a total fairy tell ending.)

We’ve since seen the Enchanted promos 1,453 times watching Lost and Battlestar Galactica episodes on Comcast On Demand, and let me tell you, I can say without any questions that the promos do not do this movie justice in any way. I saw the movie, loved it, and I STILL think it looks really dumb from the ads. So ignore the ad agencies, listen to the reviewers, and go rent this one. Even if you have a Y chromosome. It really is good.