“Well according to witnesses testimony and evidence, this massacre was the work of ninjas.”

Justin’s review: If you were to intentionally create the most stereotypically 80s action movie today, there’s no way you could top what’s already been done in American Ninja.

Largely responsible for the elevation of the ninja to near-mythical status, American Ninja is a hodge-podge of admittedly better ’80s films, including The Karate Kid, James Bond, and probably anything to do with Chuck Norris.  Yet it pushes so hard the ninja aspect that instead of being mediocre today, it’s actually endured as a cheesy cult classic that features genuinely enjoyable (if ridiculous) action.

At an army base in the Philippines, we meet Joe (Michael Dudikoff): amnesiac, loner, and — oh yeah — secret ninja warrior.  His hidden talents come to the light when a convoy carrying missiles and the colonel’s daughter is ambushed by a squad of classic black-garbed ninjas, although his efforts to fight back instead of cower like the rest of the squad earns him the status of base pariah.  Yes, this is the type of film that, when the Army experiences a fatal ambush by ninja warriors, will be far more angry at the one soldier who fought back than the actual killers.

Anyway, the convoy ambush is part of a secret conspiracy between Army officers and a local Frenchman who has a private cadre of ninja bodyguards to sell missiles elsewhere.  And if it wasn’t for those danged kids, er Joe, they might have gotten away with it too!  Joe makes a friend of tough guy Jackson (Steve James) by flipping the crud out of him and then wearing a bucket on his head, Joe secretly dates the colonel’s daughter by jumping a motorcycle over the walls of the base, and Joe goes nuclear on a seemingly unending stream of incompetant ninjas.  Oh, and he reunites with his long-lost “father,” who is actually a WWII Japanese soldier who found Joe as a baby and trained him to be a ninja instead of trying to find his family.

It’s a functional plot, but only barely so.  Really, it’s just a framework for hanging all sorts of deliciously over-the-top fighting scenes that allow Dudikoff to show off his stuff.  As a martial artist, he’s not half bad, but as an actor you have to wince every time Dudikoff opens his mouth and a childish voice emerges.  The fight scenes keep the movie zipping along at a quick, enjoyable pace, hopefully fast enough that the audience won’t have time to ask all sorts of logical questions that would destroy the structure of this movie. 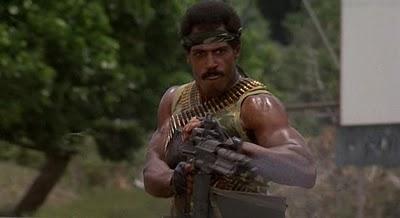 However fun the rest of the movie is, it’s in the last 15 minutes where it emerges into a glorious butterfly of death.  Joe invades the Frenchman’s compound to stop the missile transfer and save the girl, and instead of playing it safe and predictable, American Ninja does ALL THE THINGS.  It sends a virtual horde of ninjas at Joe, who gets last-minute backup by his mentor.  As he’s stabbing his way to victory, the Army shows up and starts blasting the place to smithereens.  And then the big bad ninja has a wrist laser and Joe uses a billion weapons and there’s a showdown that utilizes an obstacle course and a helicopter gets blown up with a rocket launcher and a girl gets tossed off of the roof of a building because Joe needs to pose.

Again, American Ninja is so ’80s that you couldn’t make this if you tried.  You simply have to admire it, kiss it, and salute it — in that order.