“When someone tells me they’re happy, my ass begins to twitch.”

Tagline: Kate’s stuck in a place where anything can happen with a guy who’ll make sure that it does

Summary Capsule: American/Canadian girl goes on a quest to win her boyfriend back from the arms of the nefarious French.

Justin’s review: Ask me what I was doing when the year 2000 hit. Go ahead, ask me! The big party, the turn of the millennium, the time my kids will one day ask me about. What was I doing? I was watching Meg Ryan get out of a shower.

Okay, the shower thing wasn’t intentional. Me watching it, that is. But after seeing fireworks, I got bored and popped in French Kiss to give it a whirl. When 12:00 midnight hit, Meg stepped out of the shower, and I then received the most confusing omen of my life. What does this mean for the new millenium? Will Meg be coming over for dinner?

French Kiss has serial cutie-pie Kate (Ryan) going to France against her will (she hates to fly, and… you know, France?) to win her boyfriend back, who’s fallen in love with a French girl. Why would she do this? I don’t care, you may really love a person, but if they go intercontinental and have some middle-aged crisis with a giggly tramp, you don’t go chasing after them to get them back. You calmly cancel all their credit cards, have a bonfire consisting of their clothes and CD collection, call up their parents and tell on them, key their car, and send their pet to a starving Mexican family who could use the meat. You don’t waste time with airfare and foreign country hijinks.

Along the way, Kate enlists the service of Luc (Kevin Kline), a morally questionable Frenchman. Yes, of COURSE these two will fall in love. Of COURSE he will fall in love with her first, and be all lovepuppy stricken until she gets her head out of her cute posterior. But it’s the journey that counts, and it’s a funny and quirky trip to say the least.

Kevin Kline dives into his role of an irritating Frenchman with aplomb. He plays off of Meg’s straight-lacedness (all really cute, not beautiful, girls in movies are straight-laced) quite well, and it’s hilarious to see how much he tweaks her. Particularly when he’s feeding her fear of flying when she’s on board for her first time.

Plus, when you’re taking a shower yourself, what association would you rather be making: Meg Ryan, or that guy from Psycho PLUS that spider from Arachnophobia?

Kyle’s review: For numerous odd reasons, there are a lot of things to like about this movie. Which is odd, because when I first saw it I really hated it. I was like “What is this crap?” Then I saw it again on cable, and I was like “Oh, I remember this crap.” Then many years passed and they started showing it on movie channels to fill up time when there was no NBA basketball on, and occasionally I’d pass out and wake up to find it was on and be like, “Hey, this is still pretty crap, but it has its moments.”

That’s the best I can say, is that “It has its moments,” but that shouldn’t dissuade it as I realize it might. Kevin Kline is really pretty cool in this, and if you’re prepared to deal with the ridiculous French accent (just write it off as “acting”) then he can be an enjoyable rogue of a character. Meg Ryan, bleh. I’ve only liked her in a handful of movies, and this isn’t one of them. Jean Reno is really cool; I’ve liked him in every movie I’ve seen him in, I think, even when he was evil in that one movie. I actually like Timothy Hutton (Beautiful Girls is a flawed yet fabulous masterpiece!), so that creates some tension here, because he’s a schmuck but still, it’s okay.

Whoa, this is a pretty short review, but so is Justin’s original unless he updates it. I guess I was flipping through channels recently and saw this was on, and got into it. It’s harmless comedy, not too funny, not too annoying. I guess it’s worth seeing, especially since there are some months you can’t turn on your cable or satellite without finding it playing on some channel or the other.

But as quality romantic comedies seem to grow more and more scare nowadays, it’s important to point out the ones that aren’t among the greats but can keep you occupied inbetween viewings of greatness (because you don’t want to overdo the great ones!). French Kiss is certainly good, maybe even fair. If any of the Hutton-Reno-Ryan-Kline quartet get your goose in a garter (weird French proverb), then stop flipping past Kline’s crazy accent and bum appearance and nest for a little while with French Kiss. And if you don’t, you definitely should start trying to kiss that way!

[BEST LINE!]
Kate: We were happy. Happy.
Luc: Ah. When someone tells me they’re happy, my ass begins to twitch.

Kate: What was that? What did she say? It sounded serious!
Luc: The pilot says there is a crack in the engine, but not to worry, they take off anyway.

Kate: [singing softly on the plane] Why oh why do I hate Paris… I hate Paris because my boyfriend is there… with his slut girlfriend…

Kate: The French! They hate us, they smoke, they have a whole relationship to dairy products which I don’t understand.

Kate: Did you know there are 452 official kinds of cheese in this country, isn’t that amazing? To find 452 ways to classify what is essentially a bacterial process? Don’t you think that’s amazing?
Luc: You would prefer one kind of cheese? One cheeseburger to put it on? One restaurant to eat it in?
Kate: I’m saying I *like* the cheese.

Luc: [in French] I love the sea, so beautiful, so mysterious… so full of fish.

Kate: A healthy person is someone who expresses what they feel – express, not repress.
Luc: In that case, you must be one of the healthiest people alive.

Luc: Meanwhile, his lover –
Kate: Don’t ever use that word again.
Luc: All right, this bastard woman…

Kate: You’ll be one of those grumpy old men sitting in the corner of a crowded cafe, mumbling to yourself, “My ass is twitching. Your people make my ass twitch.”

Luc: And so, now, I am here for you. [walks away abruptly]
Kate: Typical. 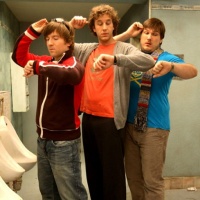