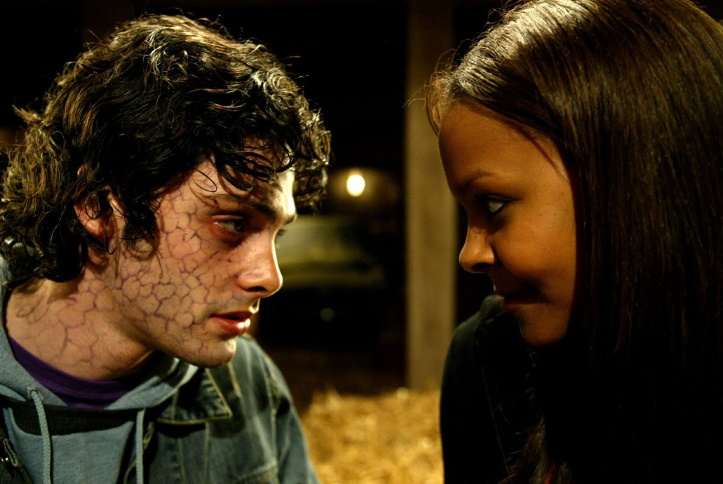 So, for the longest time (okay, the entire time) I’ve been typing my reviews on a desktop computer.  This isn’t bad, mind you.  I’m not going to complain, given that I’m aware that I’m lucky to even have a computer.  But still – my desktop is located in the guest room, the furthest point in our house from a TV.  Not very ideal for writing stuff down when you’re watching a movie.  What’s that, you say?  What’s wrong with using a pen and paper?  Well, have you ever SEEN my handwriting?  Deciphering ancient Arabic is probably easier, and I don’t speak the language.

So, anyway, I got a shiny new laptop for my anniversary/Christmas/Valentine’s Day present this year.  Pretty spiffy, yay hubby.  And what better way to celebrate than to do a mutant viewing of the cultiest film we could find?

I bring you Boy Eats Girl.

9:30: “Just being friends is better than the alternative.”  “The alternative is shagging her.”  Hee!  I’m actually thinking that the guy in the back seat is pretty darn funny.

9:32: Okay, those uniforms were just the stereotypical guy’s dream.

9:36: Wow.  Just as I thought it was bad that he was blowing his nose on a pair of panties, they were her sister’s?

9:37: You know, this is actually (intentionally) funnier than I expected it would be.  Ah, the crypt chick is his mother!  The plot thickens.

9:38: Aside from this actually being fairly entertaining so far, the soundtrack is pretty good.

9:41: Oooh, evil Daddy!  Bets on him coming around and accepting a zombie as a son in law by the movie’s end?

9:44: ::snerk::  Well, that was… heh.  Duckie just commented that for an eighty minute movie, we still haven’t seen any zombies.  Oh, come on.  Is this what that discussion in the classroom was meant to be foreshadowing?

9:45: Duckie just commented on the mom’s parenting abilities that her son has a noose hanging in his bedroom.  I must agree that- oh, COME ON!!!!  Okay, was that supposed to be funny or terrifying?  (If you can’t guess, it was the former.)

9:49: Now I’m wondering if the priest is a zombie.  Oh, sweetie, you didn’t read the fine print?  Oh, I guess that’s why you didn’t- someone tore the page out.

9:53: Commercial.  Goodie.  I guess that’s what we get for finding a free movie on On Demand.  But seriously- maybe it’s because I had NO expectations going in, but I’m actually fairly amused by this movie.  Sort of like Night of the Living Dorks.  Of course, the two moies have a heck of a lot in common.

9:55: Okay¸ that was one of the funnier transitions I’ve seen in a long time (shower scene).  Duckie just commented that he’s hoping I’m getting good fodder.  This really is total Mutant material.

10:00: The kid playing Diggs is actually really, really funny.  Although his hair keeps reminding me of a Weasley.

10:03: Seriously, WHY are zombies so fascinating to people anyway?  They are disgusting.  I mean, really¸ REALLY disgusting.   It’s not like the effects in this movie are all that and a bag of chips or anything, but just watching that guy eat that girl’s face (erm, I mean that literally)… seriously.  Why are people fascinated with creepy, decaying cannibals?  Yuck.

10:06: Oh- that’s why Samson looks familiar.  He was in Band of Brothers.  I keep thinking he looks a little like Paul Campbell without the curls and not quite as cute as the geekiness that was Billy, but I guess that’s where I’m recognizing him from.

10:07: When your books fail, surf the web!  At least she’s not looking at Wikipedia.

10:14: The killings in this are hysterical.  Oh, geeze, the priest is – OMG – EYEBALL!!!!  Seriously, this is one of the funniest things I’ve seen in a long time.  Sometimes intentionally so, sometimes not, and it’s awesome.

10:19: You know, I’m really liking the way the buddies in this treat the girl.  They actually treat her like a friend and a person.  I mean, that shouldn’t be all that noteworthy, but it is.  Oh, wait.  Isn’t her dad a zombie?

10:21: We debate how Nathan can control it and no one else can.  We have yet to reach a satisfactory conclusion.

10:24: I don’t think the girl playing Jessica is much of an actress, but it’s nice to see her kick some butt.

10:30: “Why are they going to open THIS door?  They’re flesh eating zombies, not cleaning ladies.”

10:30: This is the point the movie finally acknowledged the sexual innuendo in the title.

10:33:  It was funny enough, but the windshield wipers just acknowledged how BAD this is.  I love it.  Someone really had a lot of fun filming this.

10:36: This snake is really taking a long time to bite anyone.

10:38: I am surprised that I was actually mildly affected by that.  However, we’ve yet to see the body, so…  Um, guys?  There are still other zombies running around that you didn’t torch….

10:39: Destiny will have its way… and Duckie calls it exactly.  And he also points out that at least they don’t sparkle.

10:40: Wow.  No one hardly has a hair out of place.  And none of them seem overly affected by the fact that their entire class just turned into zombies.  Oh well.  All’s well that end’s well, I suppose.  Guess it works out.

Duckie and I just commented that we both really liked the soundtrack, but about halfway through the movie, there was no more music.  Did they run out of a music budget?  I don’t know.  It was strange.

I gotta say – and I’ve been saying it – that was a riot.   TOTAL Mutant material, and definitely requires a rent from the rest of you.  Very entertaining.