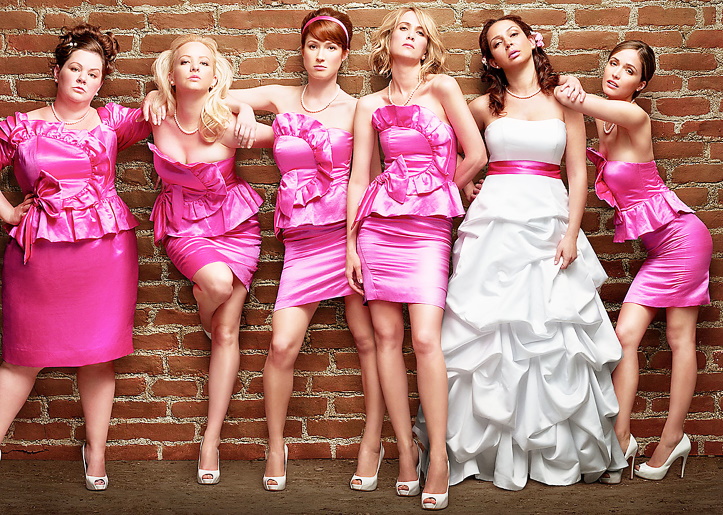 “At first I did not know it was your diary, I thought it was a very sad handwritten book.”

Justin’s review: It’s not always common to get a group of comedians at the top of their game and have them make a movie with both a strong script and plenty of room to improv. It’s even less common in this industry to have that group be entirely composed of females. But when all of that converges in the same space — and it happened with 2011’s Bridesmaids — it’s a genuine national treasure.

Annie (Kristen Wiig) is a sad sack single ex-cake store owner who finds out that her best friend Lillian (Maya Rudolph) is getting married. Determined to be the best maid of honor in the world, Annie resolutely shoves her personal issues to the side and dives head-first into the work of helping plan this monumental wedding.

Unfortunately, circumstances are going to keep shoving Annie’s failed life back into her face — and the other bridesmaids are either crazy, out to usurp the MOH position, or both. Annie forms a quick rivalry with Helen, who has it all together and takes every opportunity to undercut Annie’s role.

While Annie thought she was already at rock bottom at the start, she quickly learns she has a way to spiral down. The only bright spot on her journey is a growing connection with state trooper Nathan (The IT Crowd’s Chris O’Dowd). I love me some O’Dowd, and any movie is instantly made better by his presence.

For me, Bridesmaids is a tug-o-war between absolute cringe and gut-busting laughs. I have a really hard time sitting through cringe comedy and awkward situations, and this film is loaded with it. Seeing Helen and Annie go at each other hardcore passive-aggressively was hard to stomach, as was witnessing Annie finding new ways to be humiliated. Your mileage may indeed vary, but that sort of thing isn’t fun for me at all.

The only consolation here is the undeniable talent — both in front of the camera and on the page (Wiig and Annie Mumolo, both of Barb and Star, spent years crafting this flick). This large ensemble cast features distinct characters firing off physical and verbal comedy at an uneven rate. I had a few genuinely good laughs, though. It just wasn’t enough for the two-plus hour runtime.

(Seriously, this would’ve be a really, really good 90-minute comedy if the editor had courage. Comedies shouldn’t have you looking at your watch going, “There’s still 45 more minutes of this?”)

Maybe it’s not a world that I was expecting to be invited into, but anytime I get to see women be personable, goofy, and weird on film, I’m interested. I just wish it wasn’t so drenched in bitterness and mean-spirited barbs.