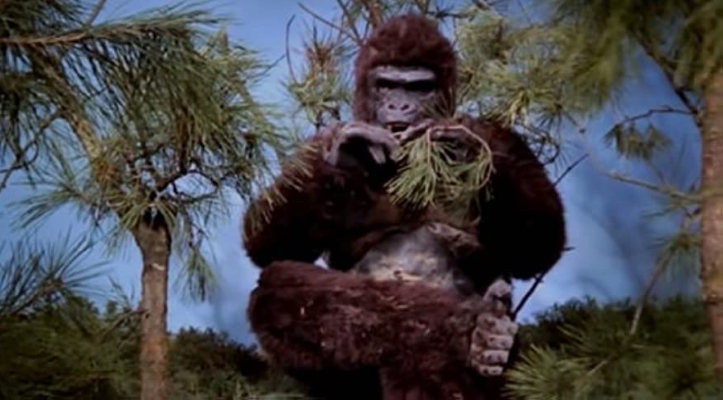 “Let’s see him dance for his organ grinder now!”

Justin’s review: Originally I was going to review the 1976 remake of King Kong in this space. But it wasn’t readily available (i.e., free) and so I went with the next best substitute: The South Korean flick that was rushed out the door that same year to capitalize on the giant gorilla trend. This was A*P*E, and once you find out what it stands for, at least 300 of your brain cells will surrender to death.

(It stands for Attacking Primate MonstEr, if you must know. At learning this, the acronym union leader threw her hands up and walked out of the building.)

Mr. Ape goes on a modest rampage among model buildings (by which I mean that the buildings are to-scale models, not that they’re upstanding citizens, mind you). My favorite part is when he starts tossing exploding barrels, a la Donkey Kong, which should’ve been enough to nominate this movie for an Oscar. Say what you will about A*P*E, but at least it delivers bold action and cranky apes in the first minutes instead of making us wait a full hour.

Caught up in this miracle of nature is an American movie star and reporter (names: not important) who discover that uppity gorillas are an impediment to relationship revivals. Also the US Army, which I guess was having a slow week in Korea, agreed to be filmed acting incredulously that a 36-foot-tall primate is stomping all over the DMZ. Watching the Colonel spend scene after scene expressing incredulity over a phone or smoking in desperation was worth every penny of an admission ticket. Rumor has it that this was supposed to be a story arc in the 13th season of M*A*S*H.

Frankly, this is way better than any version of King Kong I’ve seen to date. And I came to that conclusion before this creature terrorizes schoolchildren at a playground and nearly knocks over the camera operator by throwing a fake snake into the lens. If a guy in a gorilla costume can project surliness, then this is the surliest ape you’ll ever see. I’d go on adventures with him everywhere. What does he do next? Why, he fends off spears and flaming arrows from a bunch of martial artists, claps his hands and dances when he sees a hang glider, and eventually ends up at the movie set where the American actress is making her own low budget feature.

Reportedly, the filmmakers realized how bad this movie was going to look with its meagre budget and decided to reshoot parts to lean into the campy tone. So A*P*E certainly carries itself with a wry self-awareness of how silly it’s being. I mean, this movie is most famous for the scene where the gorilla outright gives us, the viewers, the middle finger. That should tell you something about its professionalism. What’s even better is the fact that this was made as a 3-D movie, but even though it wasn’t released that way, every third scene still has someone flinging something toward the camera.

But really — I had an amazingly good time watching this. It’s just scene after scene of the most ridiculous acting and special effects that made me believe that, yes, an ape can lie. So in the end, I’m totally glad that I couldn’t find King Kong ’76, because now I don’t even want to see that. I have A*P*E. 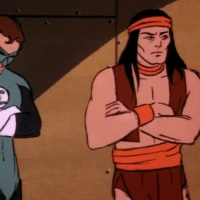