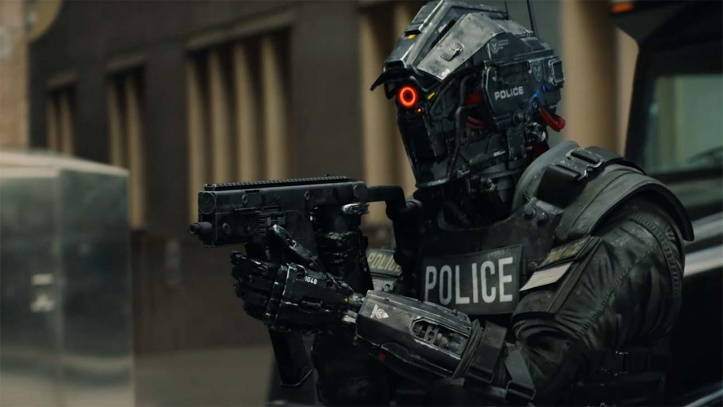 Justin’s review: I’ve admitted elsewhere to feeling fatigued with superhero movies — and not just the straight-up Marvel and DC stuff, but the two main spin-off branches: “What if super-powered people were really mean and selfish” and “what would society be like if powered-up people really walked among us?” Code 8 belongs in the second category, alongside Freaks, which I reviewed earlier this year.

I guess I’m a little tired of these approaches because very little new is being said. Truly, Code 8 and Freaks aren’t positing a world that’s any different than X-Men’s covered for decades now. Maybe it feels a little more realistic and less costumey, but that’s about it.

But I promise to give a fair shot to Code 8, as it came on several recommended lists as an underrated scifi gem from 2019. In this alternate world of the 1990s, powered people have existed in society for some time (making up 4% of the population), at first being accepted, and later being discriminated and feared. To keep the thumb on powered individuals run amok, the government uses drones and aggressive murderbots to quickly deal with any occurrence of unauthorized power usage.

Your honest average powered has fewer options to find a regular job or raise enough money for a permit to use their powers, so the system unwittingly funnels them into lives of crime or giving up their spinal fluid to be used as a happy-happy drug.

Caught in this society is Connor (Robbie Amell), who has a dying mother and a talent for using electricity in a variety of ways. Desperate for funds and frustrated with the government over-response on powered, Connor agrees to join a team of super-criminals to pull off a potentially lucrative heist. It’s a pretty standard super-power roster — strength, telekinesis, mind reading, healing, fire — but the seedier and more subtle ways they use their powers makes this team less like the X-Men and more like a bunch of talented cat burglars.

The world building of Code 8 is well done, perhaps spurred on by the limitations of its indie budget (which was crowdfunded). The frustration of the powered, the hints of complex reactions by larger society, a criminal syndicate known as The Trust, and the fearsome response of the police sketch out a scenario that would make most of us cast away the wish to have superpowers ourselves.

This isn’t an uplifting movie — the downward spiral of desperation can be depressing — but this film is quite watchable. I kept hoping for the best outcome despite all of the signs otherwise. I’m even less enthusiastic about bleak tones than superhero tropes these days, so the best I can do is give Code 8 a shaky recommendation.