Grindhouse (2007) — An overlong homage to the grindhouse subgenre 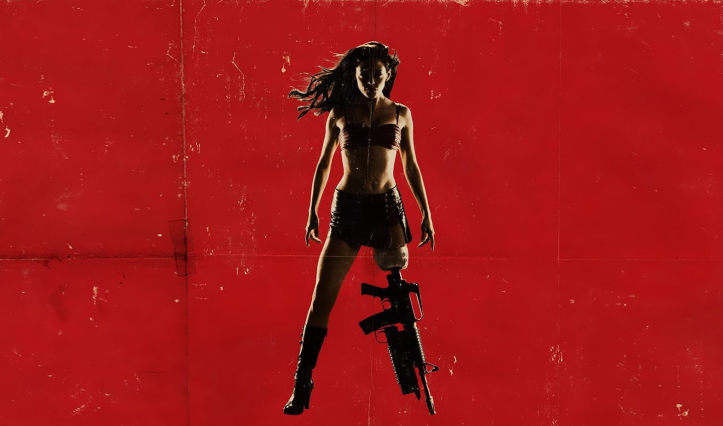 “This car is 100% death proof, only to get the benefit of it, honey, you really need to be sitting in my seat!”

Kyle’s review: Grindhouse, much moreso than other recent disappointments like The Abandoned or the Black Christmas remake, was disappointing in a way that seemed to punch me in the stomach, mockingly dangle a refund over my head, and then punch me again when I weakly reached for my money back. When my friend and I walked out of the theater, we uncharacteristically stopped and took the time to fill out response forms for the local Redlands newspaper with the hopes to warn others from wasting time and money on seeing Grindhouse.

I wish that wasn’t the case. For thirty minutes (the first thirty minutes of Quentin Tarantino’s “Death Proof”) and the duration of one of the four fake film trailers (the “Don’t” preview), I kind of caught the grindhouse vibe that everyone involved was trying to replicate. I even thought that if they keep it going a little longer everything just might be redeemed. But 31 minutes out of 3 hours and 11 minutes is not at all a passing grade, so this particular review will not be a kind one.

Actually, the only circumstances under which I can imagine sitting through Grindhouse again are such that Robert Rodriguez and QT somehow include examples of the grindhouse productions and experiences that formed their perceptions of the “genre,” so that I can accurately ascertain how effective they were in replicating what they were so affected by. Because, with my own vague recollections of B-movies and bizarre late night films that were more forgettable and tame than life-changing, the creative approaches both directors took to their respective Grindhouse contributions are closer to Airplane!-esque spoofs than actual films. If that’s exactly what they were shooting for, I guess congratulations are in order; that still doesn’t change the fact, though, that all of “Planet Terror” and most of “Death Proof” are more boring than anything else.

Because of the pedigree of both directors, and the selling of the film itself, the internet is naturally the source of nearly all debate about this film, and that debate is scorching. I personally find it difficult to agree even slightly with those who are defending the film, especially when they’re touting Tarantino’s “Death Proof” dialogue as “Oscar-worthy.” Are they kidding? If anything, I thought he was doing a deliberate pastiche of dialogue from his earlier films; as my friend Jason pointed out, the diner scene is practically plagiarized from Reservoir Dogs; the difference here being that the dialogue seems clumsily reassembled and the second batch of girls seem incapable of handling the typical Tarantino nuances.

That’s really all you can say about “Death Proof.” The first batch of girls can handle the dialogue and the “we’re so cool you can’t believe it” atmosphere Tarantino is attempting to create, although the lingering threat of Stuntman Mike (a stellar Kurt Russell, easily the best part of Grindhouse, yet who still suffers greatly from a ironic ‘final reel’ character twist inflicted upon him by Tarantino) helps elevate the tension and enjoyment quite a bit. It’s still nothing “great,” which becomes quite clear once the second half of “Death Proof” droops off the screen like a boring and ultimately annoying remake of the first half. There’s just really nothing to say. Boring!

“Planet Terror” is the more exciting piece of Grindhouse, but only in the sense that it has a fairly clear plot (other than the nagging question of what testicles really had to with anything) that moves story and character from point A to point B. Sadly, the characters are dumb action stereotypes not helped at all by nearly every actor’s decision to act so unnaturally bad (perhaps to pay homage to the original grindhouse films, or perhaps not) that their performances actually take you out of the film. Rose McGowan wasn’t the revelation other drooling reviewers will have you believe, and had all the interesting action involving her machine gun leg NOT been highlighted completely in the Grindhouse trailers, maybe that would have been an exciting surprise. As it is, you’re just waiting for the stuff you’ve seen to finish up so you can get to cool new stuff, but then “Planet Terror” ends and it’s like “Oh, okay. Never mind, then.”

And the less said about the inclusion of an Osama bin Laden-centric plot point near the end of “Planet Terror,” the better. I have to assume that and all the shoe-horned usages of cell phones in both “Planet Terror” and “Death Proof” were there solely to let us know that both films are contemporary. Otherwise: totally useless.

I think I kind of know what the idea behind Grindhouse was. I also think no one really latched onto the appropriate energy and motivation, with the ultimate result being one big, boring mess. The fake film trailers were all vaguely amusing, with “Don’t” standing out for me. However… all the other films at least give the appearance of being legitimate trailers of existing films. “Don’t” goes so far that while the horrific visuals are amusing, there is absolutely no sense of an actual film that we’re getting a glimpse of. If you see Grindhouse (and all I can say here is: Don’t!) and sit through these trailers, you’ll understand.

As of Sunday night, box office numbers appear to indicate Grindhouse is a monetary disappointment as well. If nothing else, this will hopefully keep Eli Roth and Quentin Tarantino off the screen in acting capacities for at least a little while. Here’s hoping!

Shalen’s review: Having read Kyle’s review of this film, and then taken my own dear Dad to see it last weekend, I knew I would have to review it myself. See, here’s the thing. My impression of the film was very nearly the opposite of Kyle’s, and I will tell you why.

First: I’m not all that fond of Quentin Tarantino. I liked Kill Bill: Vol. 1, but I really didn’t care for Vol. 2, and I couldn’t even sit all the way through Pulp Fiction. I never saw Reservoir Dogs at all. So a lot of the things I liked about this movie were things that aren’t all that typical of Quentin Tarantino. The dialogue is shorter and snappier than his usual work, with fewer ridiculously long monologues on things that are supposed to be cool but are instead incredibly ludicrous.* Admittedly a lot of it is pretty bad dialogue, but it’s bad in that B-movie “get the film made in a week” way that I love to watch in other films more authentically B than this one.

And then there was the whole badness aspect in general. I accepted this as deliberate and had fun with it, even as Dad and I picked out the seventies tropes throughout the movie (the shot of Cherry in the road alone with headlights approaching was particularly classic). This film is for the most part nowhere near as high on its own coolness as most of the Tarantino oeuvre — except, as Kyle pointed out, for the first half of Death Proof. It is not a coincidence that this was my least favorite part of the entire piece.

I liked the twitching film lint. I liked the “missing reel” moments that basically mock fanboy voyeurism** and the randomly inserted weirdness, such as the barbecue recipe and how it defines the relationship between two brothers in the film. I’m always game for anything involving zombies, although I really wasn’t into the excessive bursting boils and drippiness aspect here — one moment had me almost gagging, and I don’t gag easily. I liked lines such as, “What did they do, just get up and walk away?” and the inevitable follow-up.

And there’s another thing I like about Quentin Tarantino’s Kill Bill movies, and I like it about this one, too: He’s good at coming up with believable strong women. Even in an offering this corny, I have no trouble believing in Cherry being who she is and doing what she does. And one certainly can’t say there’s that much implausibility in the end of Death Proof, given that the character doing the showcased stunt is a stuntperson not only in real life, but in the film.

Part of my liking for that is personal. I hate the way serial killer movies glorify sick and evil individuals,*** and I’m never going to hate an ending that involves such an individual dying horribly at the hands of prospective victims in something other than an indirect, “Oh, I shot him totally by accident with my eyes closed” moment. Zoe and company are not the sort who would be standing with back pressed to the wall, crying and breathing heavily as the bad guy sneaks up on them, and they’re not Alice from Resident Evil, either.

Opinions on this film are going to be pretty strongly divided. I advise seeing it before rumor becomes fact and it is split up into two films, thus destroying a big part of the original premise (a grindhouse double feature). Even if it’s not your cup of tea, or shot of Wild Turkey, or whatever, the discussion afterwards should be interesting.

*I really don’t mind if I never, ever again hear Christopher Walken talk about the history of a watch in people’s anuses.
**A lot of reviewers apparently didn’t get the joke. I notice most of them were male.
***It’s also not accidental that I haven’t reviewed the Saw films or Ichi the Killer despite repeated requests for the latter.