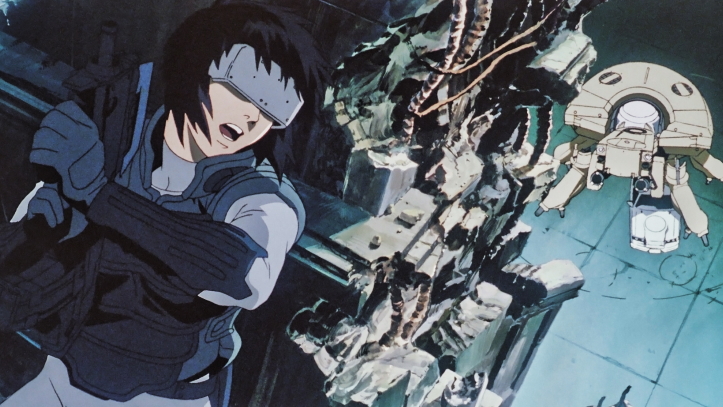 “Your effort to remain what you are is what limits you.”

Justin’s rating: The courts have ordered me to stop going outside with my naked invisible camouflage… how come she gets to do it?

Justin’s review: Back in the last decade, or perhaps a previous lifetime when I was a svelte troll that lived under stone bridges only to leap out and hand kids daffodils, I gave this great flick a brief and confusing review. That’s the real crime, but what was worse in the eyes of the growling, thrashing gangs of anime freaks out there, was that I referred to the Japanese form of comic book as “magma.” As I discovered, magma is liquid rock, and manga being Japanese comic books with tentacle fetishes. Honestly, small typo, but from some of the e-mails sent my way, you thought I had desecrated a sacred burial ground, then married their mothers, and then given their best friends the plague. The moral here is never, ever mess with the Japanese cartoon-comic fan crowd, because between their spotless Dragonball Z theater performances and weekend cosplay conventions, they’re prepared to kick your rear for the slightest indiscretion.

Ah, well, I only got one life to live, so here goes. Anime is not the god-like, be-all, end-all, wonderful form of animation that you think it is. Most of the time, it’s lame, nonsensical and quite boring. I have no doubt that Japanese animators have refined their skill far above most Western counterparts, if nothing else than the fact that they just pump out more of these cartoon movies and shows versus any other country. What suffers is a general lack of originality — the heroes and heroines usually have the same rehashed backstory, the same themes, the same “respect nature even though we live on a constantly earthquaking, volcano-erupting chain of islands” — and absolutely horrid English dubbing. They may have a visually superior product, but the Japanese still struggle with creating a story that’s engrossing, makes sense, and doesn’t sharply veer off into forty-minute discussions about philosophical topics that would bore most pretentious college students.

Thus, it’s a solid jackpot win when you find an anime film that manages to hold a reasonably interesting story together underneath all the visuals. Ghost in the Shell is one of the few Japanese animated titles I’d recommend to anyone without hesitation. Like Akira, this film exists in a futuristic Japan where highways streak three hundred feet off the ground, human-machine cyborgs are commonplace, and tanks skitter around on legs instead of treads.

The Major, a cop whose body has been modified so many times that she’s far more machine than human, struggles with the essence of her humanity and if she even has a soul any more. She works for Section 6, a shadow ops group that goes around investigating whatever X-Files knockoff is happening that week. Currently, they’re chasing “The Puppet Master,” who has graciously agreed to take a break from his own line of horror films to cameo here, and who may or may not know about a new intelligent being that’s been born solely on the internet. Or somesuch.

It’s really just a convenient excuse for people to drive cars around helter-skelter, for the Major and her cronies to fire oversized guns in stylish battles, and for somber periods of reflection where these cyborg delve deep into their conscious to reveal the truth behind the soulfulness of their… geez, there it goes again! Can’t we just have fighting without all the introspection? Is that honestly too much to ask, Japan?

It’s a beautiful ballet of technology and violence, complete with invisible, Predator-like camouflage, guns that knock the shooter back several feet per shot, and robotic limbs flying off to star in their own film. This was probably some of the coolest futuristic action prior to The Matrix, and the fact that it’s all incredibly detailed and fluidly animated has a lot to do with the love we show toward this movie.

Yet I’m not quite willing to let the Major have my cyborgian babies. Despite her habit of getting naked every time she wants to go invisible, the Major keeps to herself and we the viewers are left to guess as to what she’s thinking about every time she goes on a ten minute stare-and-walk binge. None of these characters mouth believable dialogue that isn’t painfully halting (“I feel fear, dark, alone,” she said in a complete monotone), and the film spends too much time trying to hammer in a muddled point about information, qualifications for basic humanity, reality, individuality, and whatever buzzwords were popular in the late nineties.

It’s a beautiful film, no doubt, and one that has enough interesting eye candy to keep your action junkie satisfied. I only wish that when Ghost in the Shell tries to make a serious point, it wouldn’t stop the film cold for a number of minutes as if to allow the audience to put their chins on their fists and go, “Yeah… wow… huh…”. Just get to the action, and leave the thinkin’ to us.

PoolMan’s review: Bowing to reader pressure, I decided it was high time to start watching fewer flesh ‘n blood actors in exchange for more actors who got bloody, without all that icky corn syrup.

Okay, that’s not as clever as I would have liked. Tough noogies. This movie was really, really cool. It was also screwed up like nobody’s business. I mean yikes… people’s bodies being more than 80% synthetic? Artificial eyes/hands/heads/brains? People spontaneously exploding under heavy gunfire? Chicks who strip all their clothes off and turn invisible? Okay, so it’s not all that bad…

I enjoy mind trips as much as the next guy, but I guess I just wasn’t quite geared up as I should have been when I started the tape. That’s okay, I now have a better idea of what to expect next time around! I really enjoyed parts of this movie for what they were; dark, symbolic, and incredibly detailed. When a movie looks like a wonderfully crafted art piece because it’s so intricately detailed, it’s time to call it a film. Ghost in the Shell is certainly all these things (it may be a cartoon, but Pokémon 2000 this ain’t). It will challenge you on every level, especially moral.

When humans replace their entire physical bodies with machinery, are they still human? What value does the body really have when you can replace a severed arm in less than an hour? When computer programs become aware of themselves, are they alive? And what lengths are all life forms allowed to go to justify the answers they come to?

A minor nag of mine: I hate dubbing. The English voice acting is really, really bad. I’m sorry, but that’s just the way I feel. In the middle of a very tense standoff between the hero and a rather huge, spider-shaped tank, there is no tension in her voice. While Bateau’s stance, gestures, and expression constantly speak of an unspoken love for Kusanagi, his voice betrays all the passion a man expresses reading his grocery list. If you can ignore this, great. If not, it will bend your ear and make you hear it.

Still, I think Ghost in the Shell deserves the classic cult status its earned. There’s so much going on that you won’t get it all on the first take, and subsequent viewings just make you think harder. Try this new synthetic skin on for size.