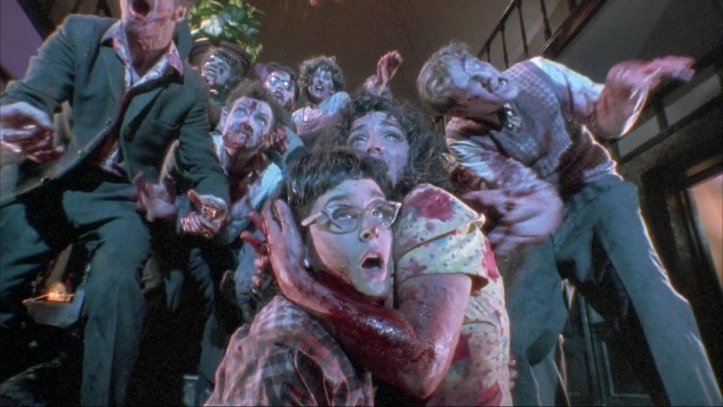 “Stand back boy! This calls for some divine intervention!”

Justin’s review: We men happen to be slightly aggressive specimens of the human race, and we need our outlets. I mean, in the old days we got to go around clubbing dinosaurs, and later, dropping atomic bombs on suburbs. But in these days such outlets are not seemly, and we are forced to go to “sensitivity awareness” seminars to tamp down on our raging testosterone. Still, every once in a while we need to get our aggression out, which is why we invented paintball, anything with the words “demolition” and “derby,” and brutal FPS video games. You must understand it helps to curb these impulses that would otherwise boil and vent inside, say, a packed circus tent.

Fortunately, filmmakers have recognized that every once in a while, we need to live vicariously through slashing, bloody, hell-strewn films like Starship Troopers and our current review, Dead Alive.

Dead Alive is not for the faint of heart, or those that get mildly nauseous when roadkill pops up on the side of the road, or even those who couldn’t make it through the entire Evil Dead trilogy without a barf bag. We’re talking about, hands down, the most blood-soaked film you’ll ever see. It’s violent, it’s so bloody that the main characters are at points swimming through seas of the red stuff, and director Peter Jackson (Lord of the Rings trilogy) loves every second of the gruesome mayhem.

I should mention that the only thing that didn’t prompt me to get up and turn the movie off was the fact that all of it is so patently fake, like the black knight’s disarming in Holy Grail. Fake is so much easier to take.

You see, there’s this evil monkey that starts to infect a small New Zealand town, causing its residents to become the living undead (less politically correctly called zombies). For the uninitiated, zombies are basically moving corpses that have a fetish for eating live people. Their bites will infect the victims, transforming them into even more zombies, and there seems to be no end to their domination. No hope, except for an unlikely savior in the form of a geeky mommy’s boy named Lionel.

His mother is the first to become a nibblin’ undead, and for a while Lionel attempts to take care of her and her victims through a lot of rope and tranquilizers. But when a massive party goes haywire and hundreds of zombies are unleashed, Lionel is the last barrier between their rotting flesh and our relatively non-rotting buns. He and his girlfriend battle these foes, non-stop, for about a solid half-hour at the end of the movie. It’s spectacular, and I’ve never seen so much blood and innovative ways to put down your neighborhood undead.

This film has great credit in taking little of the zombie horror-fest seriously. It’s so hilarious that I was laughing uncontrollably, all the while watching this movie through my fingers. Two scenes are especially memorable. First, there’s the priest who spies the undead in his cemetery, and decides a little “divine intervention” is necessary. I never knew Catholics trained their priests in the martial arts, but I’m glad they did. This guy put Jackie Chan to shame. \

The second scene is when Lionel is trying to take care of the zombie baby in the park. This little critter is truly demonic, and even with a barbed wire buggy and several beatings from our hero, the kid is forever zesty.

Ash had his chainsaw, Lionel has his lawnmower. I love to cheer during movies, and when he busts into the room with a John Deer strapped to his chest, I was doing the Snoopy dance. Way too cool.

So, if you can find some really demented friends to share this film experience with, I suggest you do so immediately. And it’s always fun to drag an unsuspecting, deer-loving, soft-hearted friend in to watch it with you… you can say it’s a romantic comedy! Just wait until they jump, screaming, through your window! Don’t tell the police I urged you to do so!

Kyle’s review: My favorite type of film has to include humor, because I can’t handle totally serious matter without an occasional one-liner or something. From my horror films, I expect a few chills and mind-numbing visuals. Though many films have tried and managed to entertain, no horror film I had seen before successfully blended gross gore and hilarious humor together.

Lionel has a possessive crazy mother, to whom he feels indebted to care for. Paquita, the most attractive girl in town, learns via tarot cards that she is meant to be with Lionel, and does her best to pursue. Sadly, this means a trip to the zoo where the mother gets bitten by a zombifying monkey, a bite that will eventually lead to most of the town getting converted into bloodthirsty unstoppable zombies. How can Lionel and Paquita stop the zombies and stay alive to spend their lives together? Well, it involves some quick thinking, a good luck necklace, some soul-searching on Lionel’s part, and a chest-mounted lawn mower.

Dead Alive is fantastic for horror fans, though if you aren’t into gross zombie flicks I’d see a few tamer ones first before just jumping into this one. The only other thing I can tell you, beside this movie kicking major ass, is that it’s probably best to see it on a totally digested stomach. Oh, and no eating spaghetti before or during; you never know until you see this movie how much most pasta looks like churned-up zombie intestines. Mmm-mmm good!