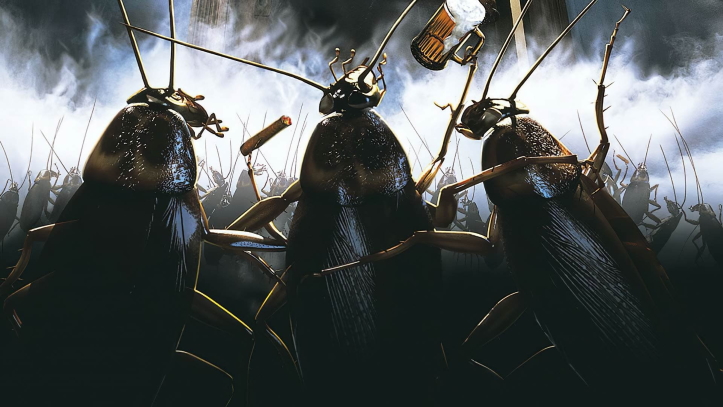 Summary Capsule: A recent college grad moves into a NYC apartment and finds out he’s sharing the rent with 50,000 cockroaches. That talk. And sing.

Justin’s rating: The roach made me do it

Justin’s review: When I have a few minutes to myself with nothing good to do, I participate in a simple ritual. I hunker down on my calves, place my chin on my fist, and deeply contemplate how in the world a film like Joe’s Apartment could ever have been made.

It makes no sense to me. A bug comedy about singing cockroaches. How did Hollywood ever buy this? Was there a lighthearted Satanic ritual involved, perhaps sacrificing a can of Spam Lite to the demon of Frivolity? Don’t get me wrong — I’m incredibly glad the world is richer by one off-the-charts bizarre flick — but I just cannot see a Hollywood pitch man saying, “Okay, get this. There’s a dumb yutz in New York who inhabits an apartment filled with talking cockroaches who also burst into spontaneous musical numbers. It’ll be gross, but we should be able to pull in the female demographic, ages 8 to 80!”

Just in case you actually listen to me or something, you might want to reconsider. In all my many aged years on this planet, I have never met another soul who has openly embraced this movie. And it’s not like I think cockroaches are cute or anything — I once had one crawl into my ear while I was sleeping, and that about scarred me for life. So for me, it’s a minor miracle that Joe’s Apartment is funny and original enough to overcome my aversion to the filthy buggies.

This whole movie has a decidedly juvenile slant to it, more so being from MTV films. Country yokel Joe (Jerry “Idiot Neve Campbell Got Me Killed” O’Connell) arrives in NYC, woefully unprepared for life in the big city. While struggling to find a job (among other things, he temps at a urinal cake company), Joe tries to find a place to live in the city for, oh, one to two hundred a month. Mocked, laughed at and spat upon, the only alternative for Joe is to falsely inherit a rent-controlled apartment from a dead lady. The lady left him a dump, which to Joe is something akin to paradise.

It is here that the filmmakers largely succeed in creating some of the most disgusting imagry to ever hit the screen. And they seem to have a blast doing so, lingering the camera for close-ups on dirty underwear, moldy pizza, inexplicable jars filled with alien eyeballs, and rancid toilet seats. It’s undeniably gross — and hey, it made me feel that I’ve got to be the cleanest guy in the world, even though I only vacuum once a month — but nothing that you’ll lose your stomach over. That’s kind of hard to explain, but it’s a bit like looking in on a zoo exhibit that would give you the serious willies if you were behind the glass, but you’re capable of handling it just looking in.

Our metaphorical zoo exhibit grows more interesting as Joe discovers that he has some other roommates: about 5,000 of them. Cockroaches rule the city, and they’re more than happy to let sloppy Joe slum in their place. Joe shares an uneasy cohabitation with the roaches, particularly with the ringleader named Ralph, but they seem to have a symbiotic relationship somewhat like a dog has with a baby who constantly drops food everywhere.

The roaches are the real stars of the show; Joe is merely a slacker wimp who provides what little conflict the plot needs. Using stop motion animation, sped-up scenes (there’s a couple shots of lights being turned on and thousands of roaches scattering that will give you the shivers), and computer graphics, the cockroaches overcome the impossible: they become likable. They’re funny and sarcastic, and do enough slapstick comedy that makes them mini-Jerry Lewises.

And as if Roach TV and cockroach gorging habits aren’t enough, the world’s culture is forever enhanced by several singing and dancing musical numbers performed by the spunky roaches. Words fail me when it comes to trying to describe what it is to watch roaches extol the virtues of a dirty towel while performing syncronized swimming in the toilet bowl, but it is a beautiful, beautiful thing. Most of the songs, including “Welcome To Joe’s Apartment,” “Funky Towel,” and “Sewer Surfing,” are catchy enough to make me wistful that they never released a soundtrack to this film.

It may not be the best movie ever — that spot is reserved for Powder — but it is undeniably unique in the pantheon of filmmaking. If nothing else, it taught me that kissing girls is wrong, because at any moment a few pounds of cockroaches might drop from above onto your faces, setting the relationship back by a day or two.

[Joe finds a man lying in a pool of blood]
Joe: Oh, my god! Mister, are you alright?
Walter: Two days, seven hours, twenty-three minutes and four seconds. That’s how long I’ve been lying here.
Joe: Are you O.K.?
Walter: ‘Course not! I’m an artist!

Walter: I wanted to express how cold, how pitiless this city really is.
Joe: Nobody touched you for two days?
Walter: Spitting doesn’t count.

[after a song]
Voice: Shh! The movie’s starting!

Ralph: Roaches to the rescue! 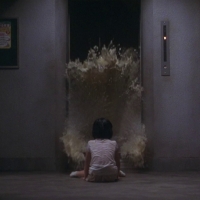 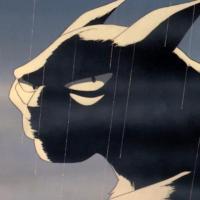