Cannibal Women in the Avacado Jungle of Death (1989) 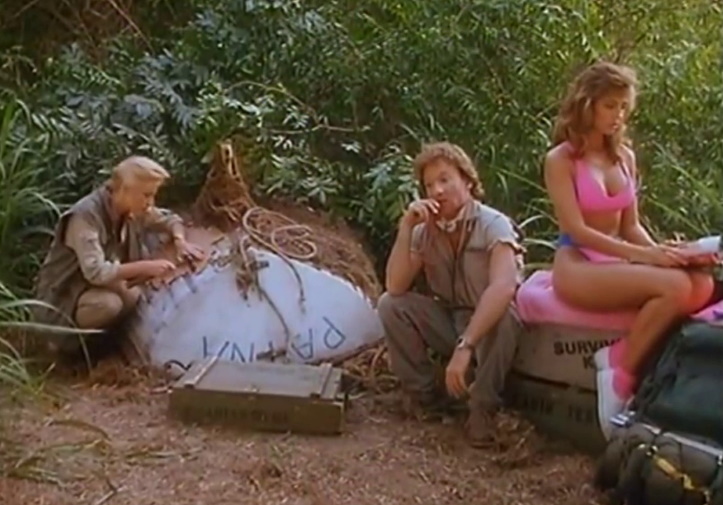 “This is a war! A war between men and women. Anything short of cannibalism is just beating around the bush!”

Al’s rating: Shannon Tweed is a feminist professor and Bill Maher is her love interest? I feel like we’re in for a comedy, folks.

Al’s review: Way back in January 2007, when I was but a wee lad of twenty-five, I was hired at the Mutant Reviewers. Shortly thereafter, I had my first phone conversation with Justin and the question came up, ‘What are you thinking of reviewing next?’ I mentioned a few different titles, some of which I have dutifully followed through on (Highlander 2, Creating Rem Lezar) and some of which are still languishing in creative limbo (Weird Science, Iron Monkey — I’ll get to you someday!).

One of the movies I made a point of bringing up, however, was Cannibal Women in the Avocado Jungle of Death. Cannibal Women is a movie that almost screams for attention from Mutant Reviewers: a hilariously tongue-in-cheek premise, wonderfully layered humor that runs from broad slapstick to clever satire, and a cast that’s filled to the brim with beautiful women wearing very, very little. It follows a brilliantly absurd story about a leading professor of Modern Feminist Studies and her student assistant, who venture into the wild jungle of Southern California’s avocado belt at the behest of the government to locate Dr. Kurtz, a colleague gone missing while observing a group of radical feminist cannibals known as the Piranha Women.

When I mentioned all this to Justin, he agreed it was a good choice. Apparently, he had also seen it but a review never quite came together for him. I privately scoffed. “Are you kidding? How could it not? Cannibal Women in the Avocado Jungle of Death has everything! There’s Cannibal Women! Avocado Jungles! Death! There is no way we CAN’T have a review!”

The cast alone should have made this easy picking for anyone. Our heroic feminist Doctor is Playboy’s 1982 Playmate of the Year, Shannon Tweed. Her bubbly, brain dead assistant, Bunny, is ’80s megababe Karen Mistal. Dr. Kurtz is perennial hottie and B-Movie goddess Adrienne Barbeau. Plus, our loudmouth, chauvinist Indiana Jones-wannabe love interest is Bill Maher, from back when he was funny instead of just irritating. So, full of pride and vigor, I sat down to correct this egregious injustice and write a Mutant-tastic review that would knock Justin’s socks off. Two paragraphs later, I was completely stumped. It got shelved.

Flash forward to a few months later, roughly April of 2007, and Cannibal Women shows up in our forums Suggestions thread, courtesy of StarOpal. “Why,” I replied, “I have a half-written review of that around here somewhere! I’ll see what I can do!” With a renewed sense of purpose, I pulled up my old file and rewrote the first two paragraphs to satisfaction. I couldn’t believe I wasn’t able to finish this last time!

There was so much to talk about: the parodies of Heart of Darkness, Apocalypse Now, and Gulliver’s Travels; the nonstop sniping between Jim and Margo; the guacamole versus salsa argument; the wimpy tribe of Piranha Men who knit potholders and bake casseroles. It’s all cult gold! And, yet, when I went to type this out, I suddenly had no idea where to go with it. Like before, it was soon sitting back on top of the ‘To Do’ list.

Flash forward one last time to December 2007. Once again, Cannibal Women comes up in casual forum conversation. “Cannibal Women? I did swear I was going to review that, didn’t I?” Guess what happened.

I don’t quite understand why a review of this movie in particular is so tough to put into words. Maybe it’s brazen superficiality and silliness is laced with just enough intelligence that I become disarmed when I think about it. Maybe it’s that this movie’s devil is in its details, and discussing it in broad strokes doesn’t do justice to the inspired goofiness. Maybe I’d just rather watch it again instead of write about it. Cannibal Women is a silver bullet that all the cult faithful should have in their arsenal; I’m not really sure I can put a finer point on it than that.

Well, now that I have all of that backstory out of the way. It’s time to start my review! So… Cannibal Women in the Avocado Jungle of Death!

Uh. Hm. On second thought, let me get back to you.

Bunny: Dr. Hunt, I just love your class!
Margo Hunt: Well, thank you, Bunny. You can call me Margo.
Bunny: I like it so much, I’ve been thinking about changing my major from Home Economics to Feminist Studies, but I wasn’t sure if you had any feminist cooking classes.
Margo Hunt: I don’t think we do, no. Interesting thought, though.

Frat Rat: This is gonna be a toga party and a beer bust, and for special girls like you, we are going to be having a wet T-shirt contest.
Bunny: But all my T-shirts are dry!

Bunny: Do lots of feminists eat their men?

Jim: All you women have ever done is… what? Some French chick invented kryptonite, or something.

Dr. Margo Hunt: Can I tell you a secret I’ve never told anyone before?
Bunny: Sure.
Dr. Margo Hunt: In a way, Jim is right; I am afraid of men. My relationships have been… well… I’ve had a lot of one-night stands. A little to drink, you know, give myself an excuse, then I subconsciously fall for jerks I know I’ll never be emotionally involved with. It’s all so empty. Passionless, really. I guess deep down I’m afraid that there can never be any real respect or equality between the sexes, not really. I’ve avoided commitment because I’m afraid I’ll be emotionally dominated by my lover or equally sad that I dominate him. I guess that seems kind of strange, huh?
Bunny: Can I tell you something too, Dr. Hunt? Something I’ve never told anybody before?
Dr. Margo Hunt: Of course, Bunny, I’m glad we get to share this.
Bunny: Well, sometimes when I’m with a guy, I wish that he’d tie me up with red licorice ropes, and then spank me, and then he’d eat the ropes, and then he’d free me, and then we’d make love while the Philharmonic played “Bolero”.
Dr. Margo Hunt: [pause] Thank you, Bunny; you’ve really put my thoughts in perspective.
Bunny: I feel better too.

Dr. Kurtz: This is a war! A war between men and women. Anything short of cannibalism is just beating around the bush.

Dr. Kurtz: All right, I was exploiting the Piranha women. You don’t know what it was like. David Letterman, God, the horror… the horror of that show… the horror.

Dr. Kurtz: There’s your sacrifice. If you wish to become a Piranha Woman you must first take his body, and then his life. What is your decision?
Dr. Margo Hunt: I refuse to kill another human being in cold blood. However, in deference to your cultural traditions, I would be willing to have sex with him.
Dr. Kurtz: Forget it! You want your cake? You’ll have to eat it.

Dr. Margo Hunt: Bunny, Bunny, you don’t have to live your life to please me. The important thing is that you’re happy. And as for what I’ve taught you, well, listen: I’ve always believed that every woman should get as much education and intellectual stimulation as possible, and that she should develop her mental abilities to their utmost potential. But in your case, there’s just no point. 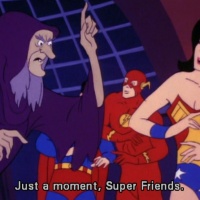