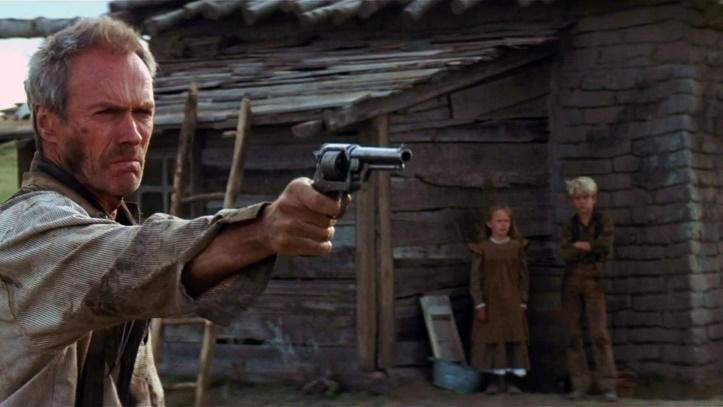 “It’s a hell of a thing, killing a man. You take away all he’s got, and all he’s ever gonna have.”

Summary Capsule: A reformed outlaw is tasked with carrying out two more murders, of men who arguably deserve killing. Can he pull it off while still holding on to his newfound morality?

Drew’s review: I’ve mentioned this in past reviews, but little of what we commonly associate with westerns is representative of the true “Old West.” As Garth Ennis espoused in his introduction to the fourth volume of “Preacher,” a real cowboy was more likely to be killed by syphillis or his horse than a bullet, and if he did die by gunplay it was probably because someone snuck up behind him with a shotgun.

John Wayne westerns from the ’50s aren’t exactly noted for their realism, a situation partially remedied by the down ‘n dirty spaghetti westerns pioneered by Sergio Leone in the ’70s. Even so, there’s still the nigh-superhuman gunplay of the Man with No Name; who, moral ambiguity notwithstanding, generally ended up protecting the weak and punishing the wicked.

All of which is a roundabout way of bringing us to Unforgiven, an attempt to present an even harder, less fanciful take on the true Old West. It’s fitting that director Eastwood is also the star, because in many ways it serves as a bookend to the spaghetti westerns Clint starred in years earlier, albeit not an uplifting one. In short, it’s not difficult to imagine William Munny as an aged Man with No Name or Outlaw Josey Wales, one whose mythic nature faded away with his youth, leaving him older, sadder, and merely mortal.

William Munny is a retired thief and gunfighter who gave up his violent ways for the sake of his wife. Dead now, she left him with two children and a quiet life of farming, which suits Will fine. But events conspire against his peaceful existence when a cowboy viciously scars a prostitute’s face for giggling at his “teensy little pecker.” (And ladies, while that’s unconscionable, do learn the lesson: just lie and say it’s the biggest ever. Really.)

When the cowboy and his friend are let off with a slap on the wrist by town sheriff Little Bill (Gene Hackman), Delilah’s fellow prostitutes offer a $1000 bounty for anyone willing to kill the pair. This draws the attention of the Schofield Kid (Jaimz Woolvett), a young punk who fancies himself a killer and who offers to split the bounty with Will in exchange for his assistance. Highly reluctant but needing the money (and rationalizing that anyone who cuts a woman deserves killing), Will recruits his old partner Ned (Morgan Freeman) to help, and the trio set off to earn the reward.

But Little Bill is determined to maintain order in his town at all costs and to stop anyone foolish enough to try for that thousand dollars… with extreme prejudice, if necessary. Of course, that’s assuming the older, mellower Will and Ned are still capable of the murders they so callously performed in their younger days.

A word of warning before I go any further — it’s hard to discuss this movie without giving away major plot points. Therefore I recommend, if you haven’t seen it yet, that you stop reading now and go rent the movie, because it is definitely worth it. Anyone who continues reading from this point on does so at their own discretion.

If you haven’t guessed from the title, Unforgiven is a bleak movie. It’s very good and powerful — great acting, won tons of awards — but it is not full of heartening moments and happy endings. More than any film I’ve ever seen, it highlights the reality of the Old West, how there were no “good guys.” No character behaves to the moral standards we as moviegoers expect out of even our most grizzled anti-heroes, be it sadistic sheriff Little Bill, married Ned taking advances on the reward in terms of “services rendered” by the prostitutes, or the biographer who attaches himself to whomever the reigning alpha dog is. Nor is this limited to the characters themselves, as Unforgiven also highlights the brutal reality of gunplay in a way few movies do.

It’s easy for us to become inured to violence when every villain meets their end with a puff of smoke from the hero’s gun, a quick grunt, and a fall away from the camera. Done, and who cares, right? They’re evil. But it’s something different entirely when we’re forced to listen to a man’s agonized moans as he dies slowly from a painful gutshot, when we’re confronted with the fact that even villains have real human emotions and fears of dying. Takes a little bit of the luster out of killing in the name of “justice”… and if nothing else, that’s something we could all stand to be reminded of from time to time.

While not a sentimental movie, Unforgiven does offer one emotional scene that’s heartbreaking to watch, as the scarred Delilah offers Will a “free one,” similar to those that Ned and the Kid have been collecting from her friends, as an advance on killing her attacker. Determined not to dishonor his wife’s memory, Will demures, and naturally the damaged girl takes it the only way anyone could in such circumstances, trying to cover up how deeply his refusal hurts her. Yet the gentleness in Will’s voice as he realizes his mistake and clumsily tries to explain that it’s not because of her scars… really, the scene serves as a perfect counterpoint to the climax in the bar, highlighting the constant struggle in Will’s personality between what he was and what he’s tried to become.

Ultimately the point Unforgiven makes — and it’s a grim and discomforting one, but not necessarily untrue — is that you can try like hell to change who you really are, but all it takes is one unfortunate event to bring your real self thundering back to the forefront. At its core, it’s the story of a man trying desperately to escape his past, a man who spends 95% of the movie telling anyone who’ll listen how he’s changed, how he ain’t like that anymore; who, even when pulled back into old habits, attempts to rationalize his actions and cling to some semblance of his hard-won morality. And a man who, in one dark, terrible, blood-soaked moment, throws it all away and embraces his true nature, and in so doing damns himself for all eternity. I mentioned earlier that Unforgiven is not a happy movie, and so it isn’t. But it’s a film rife with great performances, a more accurate depiction of history than you’ll find many places, and most importantly, something to say. Perhaps it’s not the most uplifting message, but it’s one you need to hear at least once, and you’d be hard-pressed to find a better vehicle for it than Unforgiven. Don’t hesitate to check it out.

Andy: Clyde, you got three pistols and you only got one arm!
Clyde: I just don’t wanna get killed for lack of shooting back.

English Bob: Well actually, what I heard was that you fell off your horse… drunk, of course… and that you broke your bloody neck.
Little Bill: I heard that one myself, Bob. Hell, I even thought I was dead, ’til I found out it was just that I was in Nebraska.

Little Bill: Being a good shot and being quick with a pistol, that don’t do no harm, but it don’t mean much next to being cool-headed. A man who’ll keep his head, not get rattled under fire, like as not he’ll kill you.

Will: It’s a hell of a thing, killing a man. You take away all he’s got, and all he’s ever gonna have.
Schofield Kid: Yeah. Well, I guess they had it coming.
Will: We all have it coming, kid.

Little Bill: Well, sir, you are a cowardly son of a bitch. You just shot an unarmed man.
Will: He should’ve armed himself if he’s going to decorate his saloon with my friend.

Little Bill: I don’t deserve this… to die like this. I was building a house.
Will: “Deserve”’s got nothing to do with it.
Little Bill: I’ll see you in hell, William Munny.
Will: …Yeah.