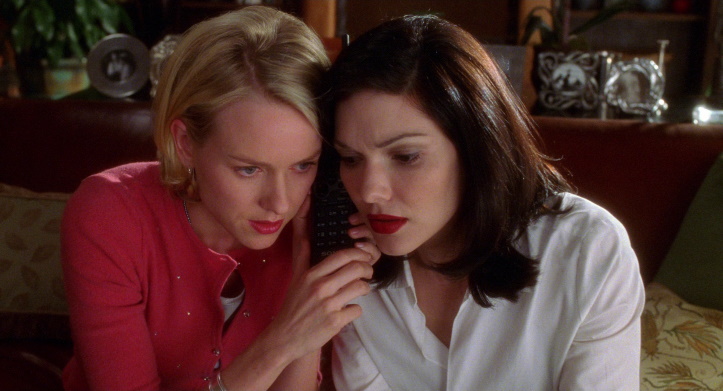 Tagline: A Love Story In The City Of Dreams

Summary Capsule: When a girl escapes nearly being murdered and loses her memory, only a filmmaker with enough guts to make a film with no hint of logical thought comes to the rescue!

Justin’s rating: I didn’t watch this movie for the reason you think I did. I promise. I don’t put myself through this kind of pain in any case.

Justin’s review: Let’s be honest here. If you see this movie, it’s because of one of two reasons. If it’s for the lesbian sex, then don’t delude yourself. There’s a special little room in the video store for you, so just stop covering for your crippling pornography addiction by trying to masquerade as a serious film renter.

The only other sane reason to rent Mulholland Dr. is that you’ve read countless critics’ bedside diaries and have become impressed enough with their love-stricken infatuation as to completely ignore that rational red flag waving in your head that says, “STOP! No David Lynch movie has ever made sense! Or been in the least bit entertaining without making you throw up afterwards!” I know that was a long sentence, so the next one will be short. Don’t fall for it.

As with Lost Highway, Twin Peaks: Fire Walk With Me, and Blue Velvet, Lynch gives us another film that is so snobby and elitist that the normal, non-David Lynchian mob will have no chance in hell of making sense of it. There’s more abstract symbolism than plot, more noir than lore (heh, thanks), and very little understanding as to the basic principles of linear time and common sense. I had to do some serious internet research to find plausible explanations as to the plot of the film, and I’m still not convinced that any of this makes sense. But hey, it looks stylish! It has lesbian sex, which means it could be an art film! It’s set in Hollywood! It must be Oscar-worthy with boatloads of cred!

Both leads Naomi Watts and Laura Elena Harring play multiple roles, revolving around the traditional story of a girl who’s moving out to L.A. to make it big in acting. Except it doesn’t happen, and it sort of does. She gets amnesia, and people are trying to kill her. And there’s a blue box that’s a key to everything. And half of the movie is viewed from the eyes of a severely deluded person, perhaps. Or it might be a dream. And characters appear and vanish at the director’s will. And there’s a very, very, verrrrrrrry long and pointless sequence in a bizarre movie house/theater. And then, lesbian sex. If you can take all that jumble and mold it into a coherent story, be my guest. But it’s easily one of the dumbest most-revered films I’ve seen in my life.

Understand that I’m not bashing Mulholland Dr. for taking the road less traveled, but for making that road incomprehensible to everyone while making us feel like we at least have to pretend that we understand the Deeper Meaning Of It All or else we’ll look like morons to the rest of the mature film community. Forget that, I’ll claim ignorance! I don’t understand this film! It makes no sense! It’s weird for weird’s sake, and it leaves me hollow and sad inside! I’m going to bed now.

Al’s rating: Like J.J. Abrams filmed the first two episodes of Lost then decided to wrap it all up on episode three.

Al’s review: David Lynch amazes me. I don’t know whose palm he had to grease to get on the list of Directors Who Do No Wrong, but it was apparently a worthy investment for him because no one else in Hollywood can get away with this level of self-indulgence and unrepentant weirdness and still be considered respectable.

Mulholland Dr. was initially conceived as a TV show. It was given the green light by ABC and filmed its pilot episode in 1999. The story follows two young women, naïve blonde actress Betty (Naomi Watts) and sultry, mysterious brunette Rita (Laura Harring), as they become entangled in a web of murder, mobsters, and mysterious blue keys in Los Angeles’ seamy underbelly. It was taut and engrossing with attractive, engaging leads and sprinkled liberally with Lynch’s unique visual imagery. Like Twin Peaks before it, the cast is brimming with quirky supporting characters and hints at plenty of other seedy tales of adultery, deception, and backroom Hollywood deals. It would have been fantastic.

The ABC executives, however, had apparently never actually watched Twin Peaks or any other David Lynch movie before agreeing to this and decided he was too weird for primetime. They passed on the show.

I don’t know what happened from here; whether Lynch failed to find a distributor on another network or just immediately jumped to the idea of a feature film, but, eventually the actors were regrouped and an additional hour of Mulholland Dr. was shot in an attempt to turn it from the first episode of a TV series into a self-contained movie.  Swearing, graphic violence, and gratuitous lesbian sex–which are nowhere to be found in the pilot footage–suddenly become front and center at the ninety minute mark and drag the story along to a conclusion only St. Elsewhere could be proud of.

Rita and Betty’s slow-boiling story of murder and intrigue runs right off the rails. Plot elements that certainly would have been important pieces to the mystery, like the blue key, are given insulting, pointless resolutions. A few are just dropped entirely. And the weirdness. The weirdness quotient is cranked up to eleven by the end of Mulholland Dr. Instead of using his trademark peculiarities to illustrate an idea or facilitate the story or just allowing them to simmer in the background and compliment the action onscreen, the plot is instead set adrift in Lynch’s ocean of absurdity, hoping you’ll bob along with it and not ask too many questions.

Don’t misunderstand me; I bear no ill will towards the aforementioned swearing, violence, or sex. In fact, I’m pretty much all for it. But David Lynch apparently labors under the belief that he can throw breasts in our face and blood on the screen, mix it in with some meaningless nonsequitur garbage, and expect us to think “Oh, he must be making sense and we’re not intelligent enough to understand it. IT’S A MASTERPIECE!” And too many critics have done just that.

He was so disappointed his cool idea didn’t pan out that he decided to throw a bunch of creepy scenes at the end of the story, do some clever editing, release it, and then hide behind his reputation if anyone called his bluff. It’s cinematic spackle, slathered on a story that has too many gaping holes to stand on its own. It’s a story that the director refuses to explain and the actors have admitted they don’t understand. Just because everyone’s confused doesn’t mean you’ve made a masterpiece; it means you’ve made a mess.

Cowboy: Now, you will see me one more time if you do good. You’ll see me two more times if you do bad. Goodnight.

Gene: Just forget you ever saw it. It’s better that way.

Cynthia: You’re broke!
Adam Kesher: But I’m not broke.
Cynthia: I know, but you’re broke. Where are you?