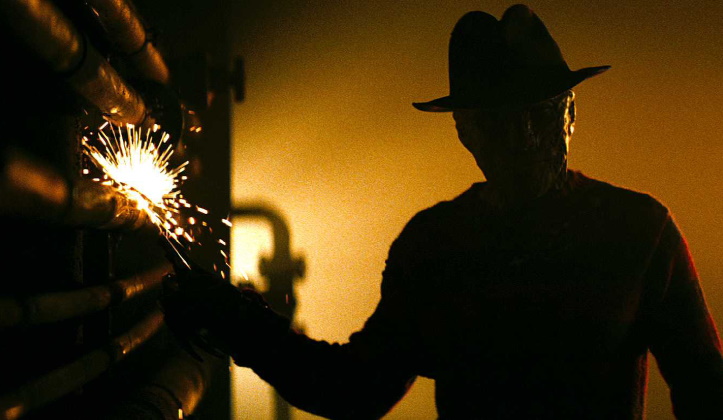 “Did you know that after the heart stops beating, the brain can function for well over seven minutes? We got six more minutes to play.”

Tagline: All you have to do is dream…

Summary Capsule: Teens are stalked in their dreams by a supernatural killer with a connection to their past.

Al’s rating: If I am ever asleep and in danger of being murdered by a killer inside my dreams, you have my permission to wake me up using any of the following methods:

All three are preferable to evisceration by an angry dream spirit, yet none of them seem to occur to the people in this film.  Now you know, and knowing is half the battle!

Al’s review: Out of all the horror remakes that Hollywood has regurgitated over the past ten years, A Nightmare on Elm Street worried me the most. About some reboots, stuff like Last House on the Left and The Hills Have Eyes, I could simply care less. Others, like Friday the 13th and Halloween, had me concerned, but I figured that the scary masks and the whole “no talking” routine would give them the boost they needed to slap together something decent. (And I was wrong. Sue me.)  The Nightmare films, however, have a villain that is as much a spokesman as he is a mascot. No matter how you slice him (ha ha), Freddy Krueger has to be the face, the voice, and the blackened, blood-splattered soul of an Elm Street flick—and this is mostly why the new one fails.

Part of it is the plot, which at first appears to be an improvement.  The story is structured similarly to the original Nightmare on Elm Street, so I won’t rehash it here, but everything has been pulled into the present day.  Nancy and our kids still don’t know how to do things like drive with the windows down and sing along to the radio, but they now have Red Bull and the Internet to keep them awake and alert.  There have been several minor changes made to the film’s backstory, as well. I won’t spoil them here, but I actually really like the way they spice up the plot and give our teens more to do than just stapling their eyelids open and trying not to die. These revisions also serve to make Freddy’s agenda clearer while clouding the goals of our heroes.  Again, this is a really good thing in my book; ambiguity in slasher movies is so rare that any nod in that direction scores major points with me.

Unfortunately, for all the positives these changes bring, they also serve to create a Freddy Krueger who simply isn’t as much fun as he used to be.  Jackie Earle Haley ought to be a superstar in this role: The dude can radiate emotion and anyone who has seen Watchmen knows that he can do the deranged sociopath thing with one knife-glove tied behind his back. As Freddy, he is straight-up brutal. He shreds through the teens of Springwood in a big, bad way. There are none of the gimmicky kills that became the bread and butter the Elm Street sequels; our victims here are simply gutted. If you’re big with the gore, then your bloodlust should be fairly well-sated by the time the credits roll on this film.

What it’s missing, though, is a certain Freddy-ness.  Fred Krueger is a guy who loves to talk almost as much as he loves to murder.  Perhaps my memory of the early Elm Streets is fuzzy (a total possibility), but I remember feeling like Freddy was constantly talking, almost narrating his attacks to both the audience on the couch and the victim who was watching their spleen hit their Reeboks. Even before the series got goofy, one thing was always true: Freddy loves to kill, he loves to hear people scream and cry and beg, and then he loves to tell you about it. In addition, everything Freddy said was laced with a playfulness that made it all that much worse.  The Freddy of our new Elm Street doesn’t have that.  He’s got a few groovy quotes of his own, but mostly he might as well be screaming “RAAAWR!”

I really had high hopes for this one, even after the bad reviews started to pile up. Part of me wanted this new Nightmare on Elm Street to have something that would make my skin prickle the way that the original still does, but mostly I was just hoping that the 21st century would finally produce a horror franchise I could tolerate. I’m actually still kind of hoping that might be true—a sequel to A Nightmare on Elm Street could very well succeed now that the first film has laid the foundation. As it stands at the moment, however, I’m just going to chalk this Nightmare up to a bad bout of indigestion and head back to bed.

Freddy: You can’t hurt me. This is my world. And you can’t ever leave.

Freddy: Did you know that after the heart stops beating, the brain can function for well over seven minutes? We got six more minutes to play.

If You Liked This Movie, Try: